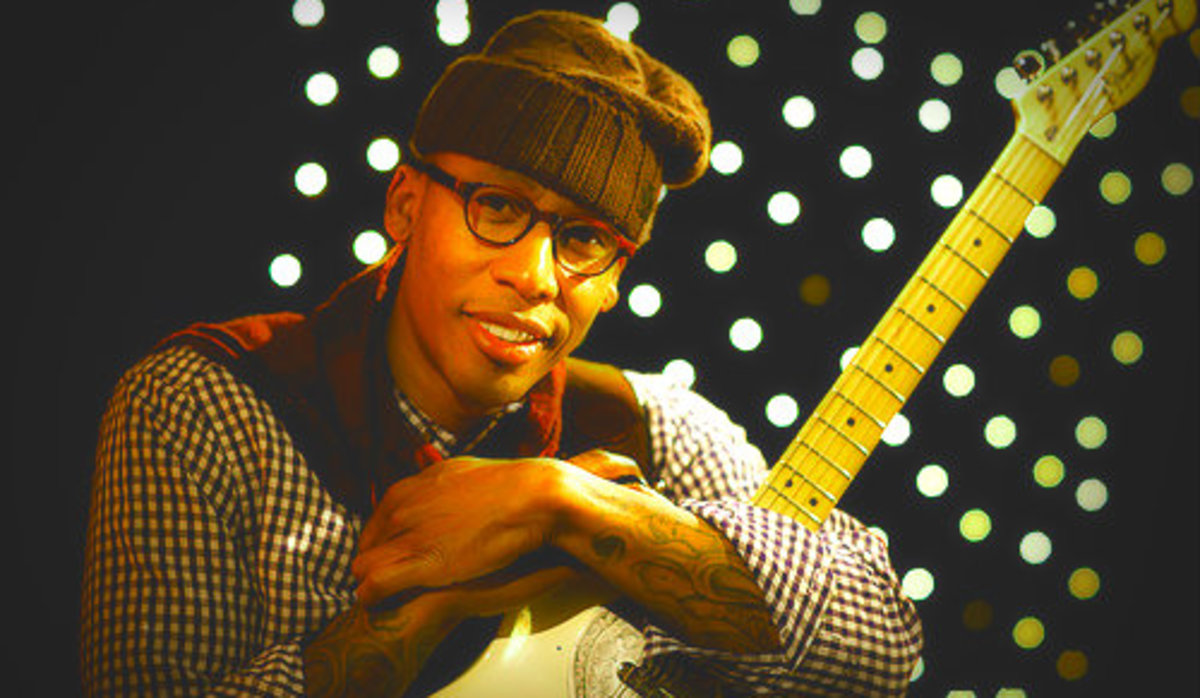 Raphael Saadiq (born May 14, 1966) is an American singer, songwriter, musician, and record producer. Saadiq has been a standard bearer for "old school" R&B since his early days as a member of the multiplatinum group Tony! Toni! Toné! He has also produced songs for such artists as Joss Stone, D'Angelo, TLC, En Vogue, Kelis, Mary J. Blige, Ledisi, Whitney Houston, Solange Knowles and John Legend.

He and D'Angelo were occasional members of The Ummah, a music production collective, composed of members Q-Tip and Ali Shaheed Muhammad of A Tribe Called Quest, and J Dilla of the Detroit-based group Slum Village. He is also a co-founder of independent video game developer IllFonic, which developped Friday the 13th: The Game.

Saadiq was born in Oakland, California, the second-youngest of 14 siblings and half-siblings. His early life was marked by tragedy; he experienced the deaths of several of his siblings as a young child. When Saadiq was seven years old, his brother was murdered. One of his brothers overdosed on heroin and another committed suicide because he was unable to deal with his addiction to the drug. His sister died as a result of a car crash during a police chase in a residential neighborhood. Saadiq states that he does not want his music to be reflective of the tragedies he experienced, saying that "And through all of that I was makin' records, but it wasn't comin' out in the music. I did it to kinda show people you can have some real tough things happen in your life, but you don't have to wear it on your sleeve."

He has been playing the bass guitar since the age of six, and first began singing at age nine in a local gospel group. At the age of 12, he joined a group called "The Gospel Humminbirds". In 1984, shortly before his 18th birthday, Saadiq heard about tryouts in San Francisco for Sheila E.'s backing band on Prince's Parade Tour. At the audition, he chose the name "Raphael", and had difficulty remembering to respond to the name when he heard that he got the part to play bass in the band. He says of the experience, "Next thing I was in Tokyo, in a stadium, singin' Erotic City. We were in huge venues with the biggest sound systems in the world; all these roadies throwin' me basses, and a bunch of models hangin' round Prince to party. For almost two years. That was my university."

After returning to Oakland from touring with Prince, Saadiq began his professional career as the lead vocalist and bassist in the rhythm and blues and dance trio Tony! Toni! Toné! He used the name Raphael Wiggins while in Tony! Toni! Toné!, along with his brother Dwayne Wiggins, and his cousin Timothy Christian. In the mid-1990s, he adopted the last name Saadiq, which means "man of his word" in Arabic. His change of surname led many to speculate that he had converted to Islam at that point; in reality, Saadiq is not a Muslim, but rather just liked the way "Saadiq" sounded and changed his last name simply to distinguish himself from and avoid potential confusion with his brother, Dwayne Wiggins. As he confirmed by telling noted R&B writer Pete Lewis of the award-winning 'Blues & Soul' in May 2009, "I just wanted to have my own identity!"

In 1995, Saadiq had his biggest solo hit to date, when "Ask of You", featured on the Higher Learning Soundtrack peaked at #19 on the Billboard Hot 100 and #2 on the R&B chart. In 1995, Saadiq produced and performed on Otis & Shug's debut album, We Can Do Whatever.

Tony! Toni! Toné! would become major R&B superstars throughout the late-1980s and 1990s. However, after the 1996 album entitled House of Music failed to duplicate the group's previous success, Tony! Toni! Toné! went their separate ways in 1997.

In 1999, Saadiq's next big project became the R&B supergroup Lucy Pearl. He recorded the self-titled album with Dawn Robinson (En Vogue) and Ali Shaheed Muhammad (A Tribe Called Quest). The group only lasted for one album.

Also in 1999, he collaborated with rapper Q-Tip on the single "Get Involved", from the animated television series The PJs. It samples The Intruders' 1973 song "I'll Always Love My Mama" and charted at number 21 on the US Hot R&B/Hip-Hop Singles & Tracks.

In 2002, Saadiq founded his own record label, Pookie Entertainment. Among the artists on the label are Joi and Truth Hurts. In 2002, he released his first solo album Instant Vintage, which earned him five Grammy Award nominations. He released a two-disc live album All the Hits at the House of Blues in 2003, and his second studio album Ray Ray in 2004, both on Pookie Entertainment.

Saadiq's third solo album, The Way I See It, released on Columbia Records on September 16, 2008, available in a collector's edition box set of 7" 45 rpm singles as well as on traditional CD, was critically well-received, made several critics' 2008 best albums lists, and garnered three Grammy nominations including Best R&B Performance by a Duo Or Group With Vocals (for "Never Give You Up", featuring Stevie Wonder & CJ Hilton); Best Traditional R&B Vocal Performance (for "Love That Girl") and Best R&B Album for The Way I See It. Music from The Way I See It was featured in the following motion pictures: Madea Goes To Jail, Bride Wars, Cadillac Records, Secret Life of Bees, In Fighting (Rogue), and It's Complicated.

Touring with a nine piece band, Saadiq hit the 2009 summer music festival circuit with performances at Bonnaroo, Hollywood Bowl, Outside Lands, Pori Jazz, Stockholm Jazz Festival, North Sea Jazz, Essence Music Festival, Summer Spirit Festival, and Nice Jazz Festival, Bumbershoot Music Festival and Austin City Limits. Saadiq has been touring Europe extensively, and held a five-night residency at the House of Blues in Tokyo, Japan, in June 2009. In 2008, Saadiq formed a new label called Velma Records, a place where he promises "people can express themselves like I did with The Way I See It... where they can dream something up and just go with it".

In 2009, Saadiq announced his video game development company called IllFonic. The first video game in development by IllFonic is titled Ghetto Golf, with an expected release late in 2010. In 2009, Saadiq teamed up Bentley Kyle Evans, Jeff Franklin, Martin Lawrence, and Trenten Gumbs to create a new sitcom called Love That Girl! starring Tatyana Ali. Raphael is an executive producer and composer for Love That Girl!. The show airs on TV One and debuted on January 19, 2010. That same year, Saadiq performed The Spinners hit "It's A Shame" in a legendary Levi's commercial and sang as part of the chorus in the 2010 remake of "We Are the World" for Haiti.

In 2011, Saadiq was the guitarist/bandleader for the group backing Mick Jagger for Jagger's tribute performance of the Solomon Burke R&B classic, "Everybody Needs Somebody to Love" at the 53rd Grammy Awards in Los Angeles and on CBS. The band that accompanied the performance was Saadiq's touring band called Stone Rollin. In 2011 he and his band performed as the ESPY's house band for the night, where he performed his latest compositions.

Saadiq's 2011 album Stone Rollin' was released to great critical acclaim. "He's always had a boyish enthusiasm for performing, and a flexible, naturally joyous voice that suggests a young Stevie Wonder," wrote Greg Kot of the Chicago Tribune, "but with his latest album, Saadiq finds a new gear. The album and his current tour demonstrate that there's a big difference between retro and classic, and the artist consistently finds himself on the right side of that divide." Kot ranked the album number seven in his year-end list, in which he dubbed it Saadiq's "finest achievement" and stated, "He's always written songs steeped in soul and R&B, but now he gives them a progressive edge with roaming bass lines and haunted keyboard textures. He's no longer a retro stylist – he's writing new classics." Critic Jim Derogatis called it "a stone cold gas of a party disc."

In 2012 he signed a deal with Toyota to do a TV commercial for the Toyota Prius. In 2013 Raphael partnered with Bay Area/ Atlanta Production company EL Seven Entertainment/ Republic Records and new R&B Superstar Adrian Marcel and released his 1st promotional mixtape "Raphael Saadiq Presents Adrian Marcel 7 Days of Weak".

Saadiq is a featured bass guitar player on Elton John's 2013 album, The Diving Board.

In 2016 he executive produced Solange Knowles album, A Seat At The Table which debuted at #1 on music charts in the United States. He also guest starred in Luke Cage, where he performs his songs "Good Man" and "Angel" at Harlem's Paradise.

In 2017 he appeared in the award-winning documentary film The American Epic Sessions, directed by Bernard MacMahon, where he recorded the Memphis Jug Band’s 1928 song “Stealin’ Stealin’” live on the restored first electrical sound recording system from the 1920s. Of recording on the system he said, “it’s amazing to just look at how it’s built, you know just look at the machine itself. It just has this like magical sound the way that it’s built. It’s true. It’s just the truest sound you could ever get.”

Solange - A Seat at the Table

Andra Day - Cheers to the Fall

Trombone Shorty - Say That to Say This

The Mighty Clouds of Joy - At the Revival

Noel Gourdin - After My Time

The Grouch - Show You the World

D'Angelo - The Best So Far

Raphael Saadiq - The Way I See It

To learn more about the artist, please visit
https://en.wikipedia.org/wiki/Raphael_Saadiq
Back