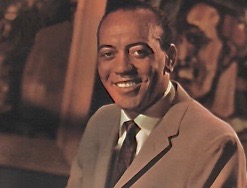 King Pleasure (March 24, 1922 – March 21, 1982) was a jazz vocalist and an early master of vocalese, where a singer sings words to a famous instrumental solo.

Born as Clarence Beeks in Oakdale, Tennessee, he moved to New York City in the mid-1940s working as a bartender and became a fan of bebop music. King Pleasure first achieved popularity by singing the Eddie Jefferson vocalese classic "Moody's Mood For Love", based on a 1949 James Moody saxophone solo to "I'm In The Mood For Love". Pleasure's 1952 recording, his first after signing a contract with the Prestige label, is considered a jazz classic; the female vocalist featured is Blossom Dearie. He and Betty Carter also recorded a famous vocalese version of "Red Top", a jazz classic penned by Kansas Citian Ben Kynard and recorded by Gene Ammons and others. Other notable recordings include a presciently elegiac version of "Parker's Mood", the year before Charlie Parker died in 1955, and Pleasure's take on Ammons's "Hittin' The Jug", retitled as "Swan Blues" in 1962.

Pleasure has been cited as a significant influence by Van Morrison, especially on his album Astral Weeks. Genya Ravan, drawing big inspiration for her singing from King Pleasure, recorded "Moody's Mood For Love" with James Moody on her 1972 CBS album Genya Ravan.

To learn more about the artist, please visit
https://en.wikipedia.org/wiki/King_Pleasure
Back