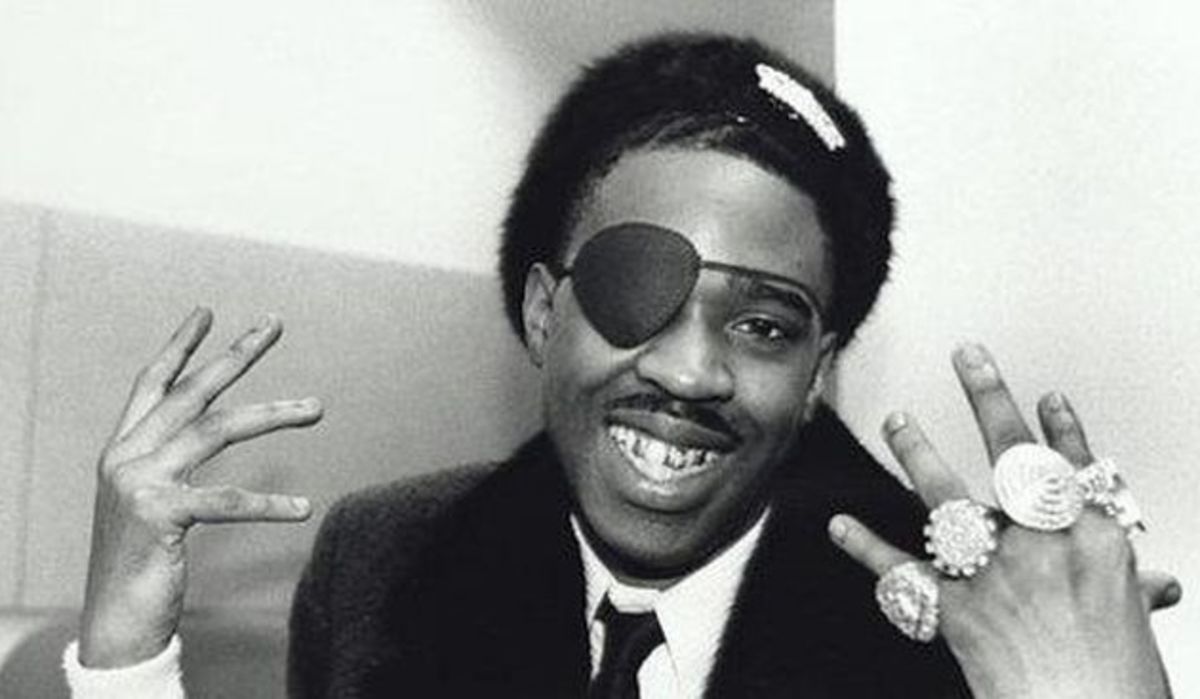 Richard Martin Lloyd Walters (born January 14, 1965); better known as Slick Rick, Rick The Ruler and MC Ricky D, is a British-American rapper. He has released four albums: The Great Adventures of Slick Rick (1988), The Ruler's Back (1991), Behind Bars (1994) and The Art of Storytelling (1999). His music has been sampled and interpolated over 600 times, in over 35 songs by artists including Eminem, Beyoncé, Mariah Carey, The Beastie Boys, TLC, Nas, Miley Cyrus, Kanye West, Black Star, The Notorious B.I.G., Snoop Dogg, MC Ren, Montell Jordan and Color Me Badd. In the process, Walters has become the most-sampled hip-hop artist ever. Many of these songs based on Slick Rick samples went on to become hit singles. He's been a VH-1 Hip Hop Honors honoree, and About.com ranked him No. 12 on their list of the Top 50 MCs of Our Time, while The Source ranked him No. 15 on their list of the Top 50 Lyricists of All Time. He has acted and cameoed in 10 movies and videos.

Walters was born and raised in the southwest London district of Mitcham, to a British-Jamaican family. He was blinded in the right eye by broken glass as an infant. In 1976, he and his family migrated to the United States, settling in the Baychester area of the Bronx. At Fiorello H. Laguardia High School of Music & Art, where he majored in visual art, Rick met Dana Dane. The pair became close friends and formed The Kangol Crew, performing at school contests, parks and local hole-in-the-wall clubs.

At a 1984 talent showcase he entered, Rick met Doug E. Fresh. Impressed by Rick's talent, Doug made him a member of his Get Fresh Crew (which also included DJs Chill Will and Barry Bee). Doug's beatbox and Rick's fresh flow turned "The Show"/"La Di Da Di" into an international anthem that turned rap music on its head and became the launching pad for "Hip Hop's greatest storyteller."

His career began in late 1985; Walters first gained success in the rap industry after joining Doug E. Fresh's Get Fresh Crew, using the stage name MC Ricky D. He was featured on the single "The Show" and its even more popular B-side, "La Di Da Di", which featured Walters' rapping over Doug E. Fresh's beatbox. Both tracks gained some mainstream attention, they appeared on Top of the Pops and Soul Train with the Get Fresh Crew. Reflecting on the double-sided gem in Rolling Stone magazine, Roots drummer and Tonight Showbandleader Ahmir "Questlove" Thompson said, "Point blank: Slick Rick's voice was the most beautiful thing to happen to hip-hop culture [...] Rick is full of punchlines, wit, melody, cool cadence, confidence and style. He is the blueprint."

In 1986, Slick Rick joined Russell Simmons' Rush Artist Management and became the third artist signed to Def Jam Records, the leading rap/hip-hop label at the time. Collaborating with his friend, DJ Vance Wright, Walters produced his solo debut, The Great Adventures of Slick Rick, which came out in 1988 on Def Jam. The album was very successful, reaching the No. 1 spot on Billboard's R&B/Hip-Hop chart. It also featured three charting singles: "Children's Story", "Hey Young World", and "Teenage Love". The release is known for its storytelling and vocal characterizations. "With the combination of Rick's Dick Van Dyke-on-dope accent and his unique narrative style, the record was an instant classic," wrote critic Matt Weiner. "Each of Rick's songs was an amusing, enthralling story that lasted from the first groove to the last."

In 1989, Walters' mother, Veronica, hired his first cousin, Mark Plummer, as his bodyguard. By 1990, Plummer had become a liability, having tried numerous times to extort money from the artist. Plummer was fired and, unsatisfied with his severance package, tried to rob Walters on numerous occasions and also threatened to kill the rapper and his mother. When Walters found bullet holes in his front door, he bought guns for protection. On July 3, 1990, Walters spotted Plummer in his neighborhood, and fired at least four shots. One bullet hit Plummer; another caught a passerby in the foot. Neither suffered life-threatening injuries.

He eventually pleaded guilty to two counts of attempted murder and other charges, including assault, use of a firearm, and criminal possession of a weapon. The rapper called it an act of self-defense. He spent five years in prison, two for the then-second-degree attempted-murder charges he received for the shooting, and three for his struggle with the Immigration and Naturalization Services over his residency in the U.S. He was released from prison in 1997.

After being bailed out by Russell Simmons, Walters recorded his second album, The Ruler's Back, released in 1991. Despite peaking at No. 29 on the Billboard 100, the album received mixed reviews and wasn't as commercially successful as his debut. In the documentary film, The Show, Russell Simmons interviewed Walters while he was imprisoned on Rikers Island.

Walters remained with the Def Jam label, and on May 25, 1999, released a fourth album, The Art of Storytelling. Generally considered the authentic follow-up to his 1988 debut, The Art of Storytelling was an artistically successful comeback-album that paired him with prolific MCs like Nas, OutKast, Raekwon, and Snoop Dogg. The Los Angeles Times announced it as the "triumphant return of rap's premier yarn-spinner," calling the song "2 Way Street" "a much-needed alternative to rap's misogynistic slant." It charted higher than any of Slick Rick's prior releases: No. 8 on the Billboard 200; No. 1 on the Top R&B/Hip-Hop Albums chart.

After performing on a Caribbean cruise ship in June 2001, Walters was arrested by the Immigration and Naturalization Service (INS) as he re-entered the United States through Florida. He was promptly told that he was being deported under a law allowing deportation of foreigners convicted of felonies. Rick was continuously refused bail, but after 17 months in prison he was released on November 7, 2003. In October 2006, the Department of Homeland Security began a new attempt to deport Walters back to the United Kingdom, moving the case from the United States Court of Appeals for the Second Circuit based in New York to the more conservative Eleventh Circuit. The court is based in Atlanta, Georgia but the trial was expected to proceed in Florida, where immigration agents originally arrested Walters.

Walters married his wife Mandy Aragones in April 1997, four years after the couple met at a Manhattan nightclub. The performer has two children, Ricky Martin Lloyd Santiago and Lateisha Walters, from a previous relationship. He and his wife have donated about a dozen items from his collection to the Smithsonian National Museum of African American History and Culture.

Slick Rick and the Soul Rebels Brass Band collaborated on June 21, 2012 in Washington, D.C. at the historic Howard Theatre which re-opened in April 2012.

In 2014, Rick participated in Will.i.am's "Trans4M" concert, which raised more than $2.4 million for the music producer's i.am.angel Foundation.

On April 15, 2016, Rick was granted U.S. citizenship, remarking, "I am so proud of this moment—and so honored to finally become an American citizen." He will also retain his UK citizenship.

On November 2, 2018, Rick released the single "Snakes Of The World Today".

"Children's Story" has been covered by rapper Everlast on his album Eat at Whitey's, by MC duo Black Star on their 1998 album Mos Def and Talib Kweli are Black Star, by Tricky on the album Nearly God with the rap performed by Martina Topley-Bird, and by Israeli rapper Sagol 59 on the album The Two Sides of Sagol 59. Rapper The Game recorded a similar song, "Compton Story". The song has also been referenced and interpolated by numerous artists, including Montell Jordan for his 1995 hit, "This Is How We Do It".

Slick Rick's style is commended by music critics. Music journalist Peter Shapiro wrote, " 'Children's Story' was important because of its narrative structure and Rick's understanding of how crucial little sonic details—such as his use of a female voice and his yawning rap—were to hip hop style."

He is largely known for his story raps, such as "Children's Story" and "La Di Da Di". Shapiro writes that he "largely introduced the art of narrative into hip hop... none of the spinners of picaresque rhymes who followed did it with the same grace or humor." AllMusic states that he has the "reputation as hip hop's greatest storyteller." In the book Check the Technique, Slick Rick says, "I was never the type to say freestyle raps, I usually tell a story, and to do that well I've always had to work things out beforehand." Kool Moe Dee comments, "Slick Rick raised the lost art of hip hop storytelling to a level never seen again." Devin the Dude notes that Slick Rick's "Indian Girl" is a good example of the type of humor that existed in hip hop's golden era, and Peter Shapiro says that "he was funnier than Rudy Ray Moore or Redd Foxx."

Slick Rick uses very clear enunciation and raps with the "Queen's English". O.C. states: "The Great Adventures of Slick Rick is one of the greatest albums ever... the stuff he was just saying on there, it was so clear.. the [clear] syllable dude was Slick Rick for me". He is also renowned for his unique "smooth, British-tinged flow" which contains distinct structures. In the book How to Rap, it is noted that on the song "I Own America", he "puts a rest on almost every other 1-beat so that each set of two lines begins with a rest." Kool Moe Dee stated that, "Rick accomplished being totally original at a time when most MCs were using very similar cadences." He has what is described as "singsong cadences"; Andy Cat of Ugly Duckling mentions that Slick Rick uses a melodic delivery on the track "Hey Young World". Slick Rick is also known to extensively use punch ins, especially in his story rhymes as different characters; Kool Moe Dee says Rick used "multi-voices to portray multiple characters."

Slick Rick has been referenced in numerous songs:

Slick Rick is a playable character in the video game Def Jam: Fight for NY.

To learn more about the artist, please visit
https://en.wikipedia.org/wiki/Slick_Rick
Back