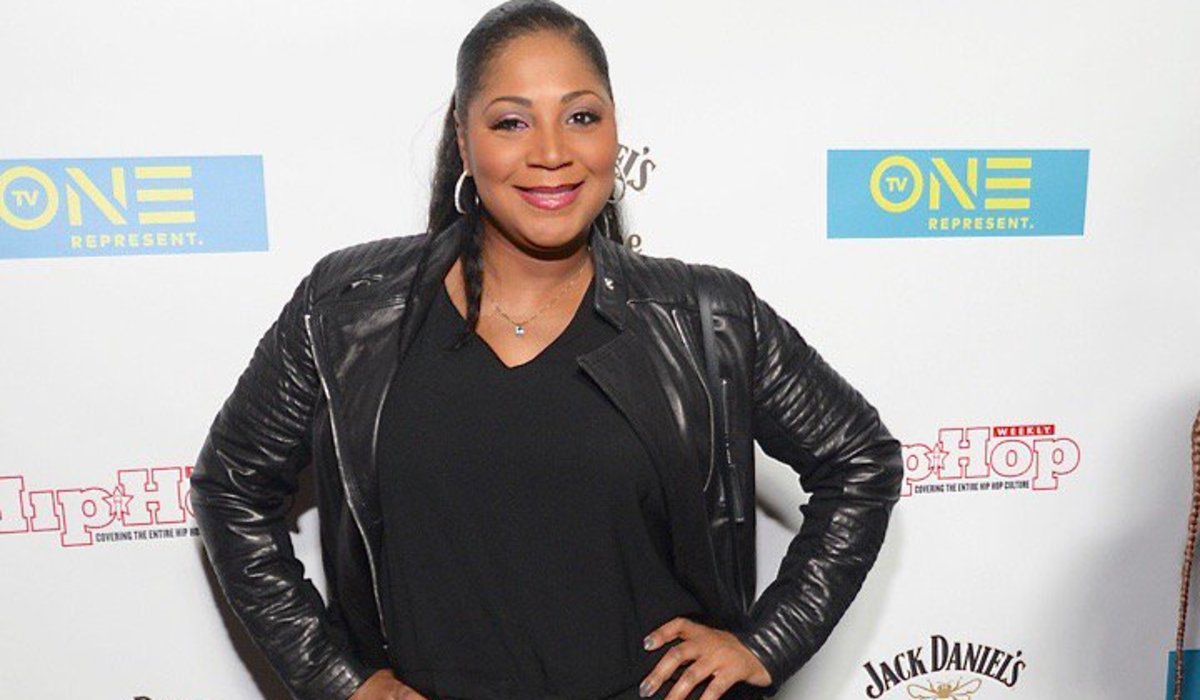 Trina Evette Braxton (born December 3, 1974) is an American singer, actress and reality television personality. She is a younger sister of R&B singing icon Toni Braxton. Trina had her first big break in music in 1992 as a founding member of the R&B group The Braxtons, formed with her sisters. After losing two members, The Braxtons released their only album, So Many Ways, as a trio in 1996 along with four singles: "So Many Ways", "Only Love", "The Boss", and "Slow Flow".

In 2011, Braxton reunited with her sisters for the WE tv reality show, Braxton Family Values. The first season was the #1 rated reality show on WE tv, and the network ordered a 13-episode second season of the show after the third episode.

Braxton has starred in several movies and launched a line of hair and bar company.

She was born in Severn, Maryland. Her father, Michael Conrad Braxton, Sr., was a Methodist clergyman and power company worker, and her mother, Evelyn Jackson, a native of South Carolina, was a former opera singer and cosmetologist, as well as a pastor. Braxton's maternal grandfather was also a pastor.

Braxton and her siblings were raised in a strict religious household, and Braxton's first performing experience was singing in her church choir.

Toni, Traci, Towanda, Trina, and Tamar Braxton signed their first record deal with Arista Records in 1989. In 1990, they released their first single, "Good Life". It would be their only single as a fivesome. "Good Life" was not a hit, peaking at No. 79 on the Billboard Hot R&B/Hip-Hop Singles chart. At the time of the single's release, the members' age differences created a problem with marketing. Subsequently, The Braxtons were dropped from Arista Records.

In 1991, during a showcase with Antonio "L.A." Reid and Kenneth "Babyface" Edmonds, who were in the process of forming LaFace Records, Toni Braxton, minus her four sisters, was chosen and signed as the label's first female solo artist. At the time, the remaining members were told that LaFace was not looking for another girl group since it had just signed TLC.

In 1993, LaFace Records A&R Vice President, Bryant Reid, signed The Braxtons to LaFace. However, the group never released an album or single for the record label. When Reid moved on to work for Atlantic Records, he convinced executives at LaFace to allow him take the group to Atlantic also.It was reported in Vibe magazine that in 1995, Traci Braxton had left the group to pursue a career as a youth counselor. However, it was not confirmed until a 2011 promotional appearance on The Mo'Nique Show, that Traci was not allowed to sign with Atlantic because of her pregnancy at the time.

In June 1996, Tamar, Trina, and Towanda returned with a new album entitled So Many Ways, which shared the same title as its lead single. Released on August 13, 1996, the album peaked at No. 26 on the Billboard R&B/Hip-Hop Albums charts. It became their first and only LP. Atlantic Records A&R VP, Bryant Reid, served as the album's executive producer. At the time of its release, Reid told Billboard Magazine, "I had a vision for them then that was about young sophistication with sex appeal." So Many Ways included production from Jermaine Dupri and Daryl Simmons along with Christopher "Tricky" Stewart and Sean "Sep" Hall. The album also included a cover of Diana Ross's hit "The Boss" and Klymaxx's song "I'd Still Say Yes".The Braxtons released a music video in order to promote "So Many Ways". It was directed by Cameron Casey and featured upcoming actor Mekhi Phifer. The trio also performed a remixed version of "So Many Ways" with rapper Jay-Z on September 9, 1996 at the Soul Train Lady of Soul Awards. The single was also used as the opening track for the soundtrack to the comedy film High School High. "So Many Ways" went on to peak at No. 83 on the Billboard Hot 100 chart in 1996, No. 22 on the Billboard R&B Charts and number 32 on the UK Singles Chart in January 1997.

The album's second single, "Only Love", was released on January 25, 1997 and peaked at number 52 on the Billboard R&B/Hip-Hop Songs Chart. A music video for this song was also released. A Masters At Work remix version of The Braxtons' cover of "The Boss" reached number 1 on Billboard Dance/Club Play Chart in early 1997. Slow Flow was the final single released from So Many Ways. It peaked at No. 26 on the UK Charts in July 1997, becoming their highest charting single in the UK. The Braxtons also served as the opening act for Toni Braxton on the European Leg of her Secrets Tour in 1997. The Braxtons decided to part ways as a group after lead singer Tamar Braxton left to pursue a solo career with DreamWorks Records in 1998. However, the members continued to sing and act in various other projects.

Trina appeared in the 2004 Tyler Perry play Meet the Browns as Tracy Stevens. She was also part of the play Rise, written by Salt from Salt-n-Pepa and Christopher "Play" Martin from the rap group Kid 'n Play and starred in an off-Broadway production of Dreamgirls as Deena Jones. In 2004, Trina Braxton appeared in "The Walk" with Eva Pigford and Vanessa Bell. Additionally, she co-starred in two independent films, including Jail Party, and was host for the unbroadcast Urban Idol for UPN. Trina and Tamar performed as background singers and dancers for the entire duration of Toni's Libra Tour in 2006. They also performed in Toni Braxton: Revealed at the Flamingo Hotel and Casino until R&B singer Sparkle replaced Tamar in 2006 and fellow former Braxtons member Towanda Braxton replaced them.

In 2009, Trina joined the wedding band "Simply Irresistible" as a lead vocalist. She also made a cameo in Tyler Perry's I Can Do Bad All By Myself as a member of a band performing with singer Mary J. Blige's character.

In 2011, Braxton reunited with her sisters for the WE tv reality show, Braxton Family Values. Trina and Towanda, her sister, are backup dancers for older sister Toni

In 2012, Braxton began her solo career, after signing with Soltri Entertainment. Her solo debut single, Party or Go Home, was released on March 22, 2012. The music video accompanying the song was directed by Derek Blanks. Trina also guest starred along with her sister Tamar on TV Land's new sitcom The Soul Man starring Cedric The Entertainer.

In 2013, she was released the single Game Time. The same year, she was featured on the song The Chipmunk Song (Christmas Don't Be Late), on her sister Tamar's Winter Loversland.

In 2014, she landed a role in the TV movie Where's The Love, alongside David Banner and Denise Boutte. In the same time, Braxton, and sisters Toni and Tamar guest starred on their sister Traci's music video "Last Call".

In October 2015, the group including Toni, Tamar, Traci, Trina and Townada, will be releasing a new material intituled Braxton Family Christmas as five members. The album will be released on October 30 and pre-order on October 16th. Braxton Family Christmasdebuted at number 27 on the US Billboard R&B/Hip-Hop Albums, number 10 on the US R&B Chart and number 12 on US Top Holiday Albums on November 21, 2015. The album charted at number 1 on the US Heatseekers Albums on December 12, 2015.

On April 20, 2018, Trina, Towanda and Toni appears as featuring on their sister Traci's single "Broken Things" Since September 10, 2018, Braxton is a co-host of "Sister Circle" talk show for the TV One and TEGNA networks from 12:00 p.m. – 1 p.m., along with Quad Webb-Lunceford, Syleena Johnson and Rashan Ali.

In parallel of her artistic career, she is co-owner of the recording studio 'The Bass Mint', located in Atlanta, which includes a recording studio and a studio to make films, television projects and music videos and founded her production company named Soltri Entertainment. In 2014, she had launched a hair collection line. She had launched her bar-company Bar-Chix.

To learn more about the artist, please visit
https://en.wikipedia.org/wiki/Trina_Braxton
Back