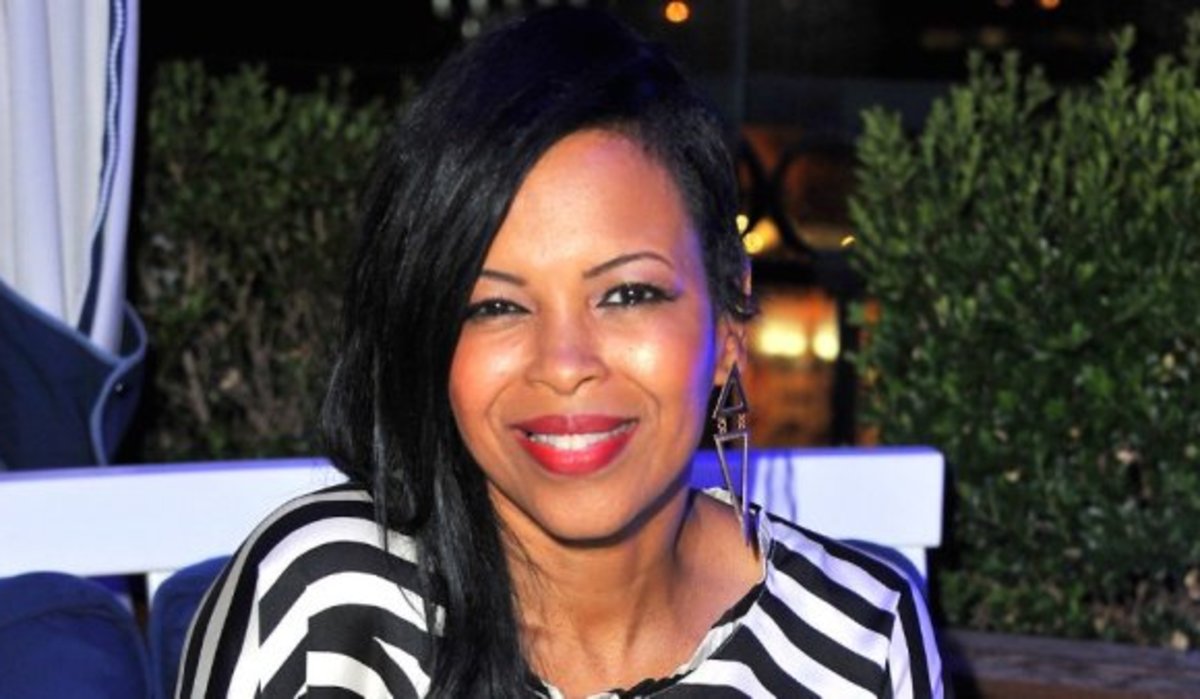 Dawn Sherrese Robinson (born November 24, 1965 or November 28, 1968) (sources differ) is an American singer–songwriter, and actress. Robinson is best known as a founding member of the R&B/Pop group En Vogue, one of the world's best-selling girl groups of all time. Following her departure from En Vogue, Robinson joined Lucy Pearl and released their self-titled debut album Lucy Pearl in 2000, which went platinum worldwide and produced the successful singles "Dance Tonight" and "Don't Mess with My Man".

In 2002, Robinson released her first solo album Dawn, which produced the single "Envious". In 2005, Robinson rejoined En Vogue for a tour, but departed from the group before they could record another album. In 2009, Robinson briefly returned to En Vogue again for their 20th Anniversary Tour. In 2010, she left En Vogue once again due to poor management and compensation of work. In 2013, she joined the cast of R&B Divas: Los Angeles for the first season of the series. Throughout her career, Robinson has sold a combined total of over 11 million records as a solo artist as well as with En Vogue and Lucy Pearl. Her work has earned her several awards and nominations, including two American Music Awards, a Billboard Music Award, seven MTV Video Music Awards, four Soul Train Music Awards and eight Grammy nominations.

Robinson was born in New London, Connecticut where she attended New London High School. Her mother had her in the church singing in the choir at AME Zion Church. From there Dawn was in the studio traveling from New London to Massachusetts, putting her beautiful voice on tape. At a Stephanie Mills concert her mother was able to get the band to listen to a tape of Dawn's. They advised Dawn's mother to send her to California. In 1980 Dawn was sent to live with her cousin to see if California was a good fit for the family. A year later Dawn, her mother, sister and cousin packed up and drove cross country to Oakland, California. Dawn first attended Oakland High School. Her family finally settled in San Leandro, California where Dawn attended San Leandro High School; graduating in 1984.

In July 1989, Robinson auditioned for a female group. Robinson was one of four women selected to become part of the group which became En Vogue. The four began recording their debut album in August 1989 and finished in December of the same year. In 1990, En Vogue released their first single "Hold On", which became a number-one single. Later that year, the group released their debut album Born to Sing, which went platinum. The group released their next multi-platinum album Funky Divas in 1992. Robinson sang lead vocals on the album's top-charting singles which included "My Lovin' (You're Never Gonna Get It)", "Giving Him Something He Can Feel", and "Free Your Mind", which remains one of their signature songs. "Free Your Mind" won two MTV Video Music Awards, for "Best R&B Video" and "Best Dance Video". En Vogue released an EP in the fall of 1993, entitled Runaway Love. The extended play featured Robinson's lead vocals on the number-one hit "Whatta Man", which featured Salt-n-Pepa. The song also appeared on Salt-N-Pepa's Very Necessaryalbum.

In 1996, En Vogue recorded "Don't Let Go (Love)" with Robinson singing lead vocals. The song featured on the soundtrack to the motion picture Set It Off. Released in the autumn, it became the group's biggest hit to date going number one worldwide. It also sold millions of copies and became certified platinum by the RIAA. Inadvertently, it would also be the final En Vogue single to feature Robinson. One of Robinson's final performances with the group came in October of that year, when the group sang the final national anthem rendition in the history of Atlanta–Fulton County Stadium in Atlanta, which came in game five of the 1996 World Series. In response to the large commercial success of "Don't Let Go (Love)", the group steadfastly went to work on its third album. As the album was nearing completion, Robinson chose to leave the group in April 1997 after difficult contractual negotiations reached a stalemate. Despite Robinson's abrupt departure, En Vogue resolved to continue as a trio. Later that year, Robinson contributed to The Firm on their hit song "Firm Biz" which sampled Teena Marie's single "Square Biz". In 1998 Robinson recorded "Rock Steady" for the movie "Doctor Dolittle".

In 1999, Robinson appeared in and recorded the jazz Classic "Drop Me Off in Harlem" for the movie Life. Later that same year, Robinson joined Lucy Pearl. The group released their self-titled debut album Lucy Pearl in May 2000 on EMI Records, which sold over a million copies worldwide. The album's lead single "Dance Tonight" charted at number five on the R&B singles chart as well as at number thirty-five on the Billboard Hot 100. Following the release of their album, Lucy Pearl toured in the United States and internationally making several television appearances on shows that including The Tonight Show with Jay Leno, The Chris Rock Show and Later With Jools Holland. In October 2000, Lucy Pearl released the second single "Don't Mess with My Man", which became the group's most successful single in the UK, peaking at number twenty in the UK Singles Chart. It also garnered success in France where it peaked at number fourteen. In the United States, the song was just as successful as their debut single "Dance Tonight", peaking at number thirty-five on the Billboard Hot 100. Shortly after the release of their second single, Robinson left the group due to the lack of fair compensation within the group. After unsuccessfully trying to negotiate a fair agreement with her bandmate Raphael Saadiq, Robinson quit the group and was replaced by Joi. However, Lucy Pearl disbanded in 2001 without releasing a second album.

In 2001, Robinson had signed with Dr. Dre's Aftermath Records. After leaving Aftermath Records, Robinson released a solo album entitled Dawn, on "Q Records" a division of QVC and Atlantic Records in January 2002. Robinson also went on several national television shows promoting the single. In 2005, after an eight-year absence, Robinson rejoined En Vogue. With Robinson part of En Vogue (completing the original line-up), they went on to sign with one of the industry's largest management firms, The Firm Management Group. In September 2005, they joined Salt N Pepa for the girl groups' first-ever joint public performance of their 1994 hit, "Whatta Man" at VH-1's Hip Hop Honors. They also earned another Grammy nomination for the single "So What the Fuss", which featured Stevie Wonder and Prince (on guitar). The group also appeared in the single's music video. After failing to agree on business terms, Robinson once again chose to defect from En Vogue and was replaced by Rhona Bennett. As a result, En Vogue was let go from The Firm.

In 2008, Robinson started touring and doing private events, performing songs she recorded with En Vogue and Lucy Pearl. Later that year, Robinson reunited with En Vogue and performed at the 2008 BET Awards along with Alicia Keys, SWV, and TLC. In 2009, Robinson joined En Vogue for their "20th Anniversary Tour". In 2010, all four members appeared on the cover of Jet magazine to promote their reunion tour. Following their reunion tour, Robinson decided not to record on the new En Vogue album due in the fall of 2011 after failing to reach an agreement. On September 26, 2011, Ellis, Jones & Herron without Robinson, debuted their new single "I'll Cry Later" from their forthcoming album that was planned for a December release. Negotiations for the album release resulted in Robinson leaving En Vogue which was discussed with Jones on Access Hollywood nearly a year later on October 17, 2012. Robinson and Jones talked about the contract issues and poor management of En Vogue.

In October 2012, Dawn and Maxine Jones appeared on Access Hollywood to announce they are forming a new girl group called Heirs to the Throne. The duo launched their website, Twitter, and Facebook for the new group. They also performed at several venues. The following year, Robinson and Jones parted ways and Jones went on to form her own group called "En Vogue to the Max". It was later announced that the former group mates Cindy Herron and Terry Ellis sued Maxine Jones for use of the En Vogue name and demanding one million dollars for damages. However, Ellis and Herron could not demonstrate harm done to the company from Jones' use of the name. Robinson participated as a witness in the trial but ultimately stated that she was not directly involved in the dispute, as she had surrendered her rights to use the name herself when she departed from the LLC years earlier.

In 2013, Robinson joined the cast of R&B Divas: Los Angeles. The series premiered on TV One on July 10, 2013. The series chronicles the lives of R&B singers Robinson, Lil Mo, Chanté Moore, Kelly Price, Claudette Ortiz, and Michel'le as they balance their music careers and personal lives. It is a spinoff to R&B Divas: Atlanta. Throughout the series, Robinson introduced us to her celebrity boyfriend Christopher Nils Connolly. The reunion, which Robinson did not participate in, was filmed on August 6, 2013, with Wendy Williams as the host. Robinson turned down her option and will not be appearing in the second season of the show. Bravo have apparently shown interest in Robinson and Connolly doing their own reality show. Robinson was to begin touring with selected cast members from both R&B Divas LA and Atlanta within the United States. In November 2014, on TMZ Live Robinson threatened to sue Lifetime if they did not change their marketing which falsely claimed the four original members were involved in An En Vogue Christmas, a movie only consisting of two original En Vogue members: Cindy Herron, Terry Ellis; and Rhona Bennett. In 2017, Dawn told Hollywood correspondent Noreen Lanie she is working on a new album, however a release date has not yet been confirmed.

Robinson has been married once, to Andre "Dre" Allen from May 24, 2003 until 2010. As of 2012, Robinson has been in a personal relationship with former international soccer player, fashion icon and BMG recording artist Christopher Nils Connolly. Robinson stated on her reality show R&B Divas LA that she was looking forward to starting a family with Connolly. During an interview with Fubar Radio in July 2017, Robinson stated that they were no longer together.

To learn more about the artist, please visit
https://en.wikipedia.org/wiki/Dawn_Robinson
Back