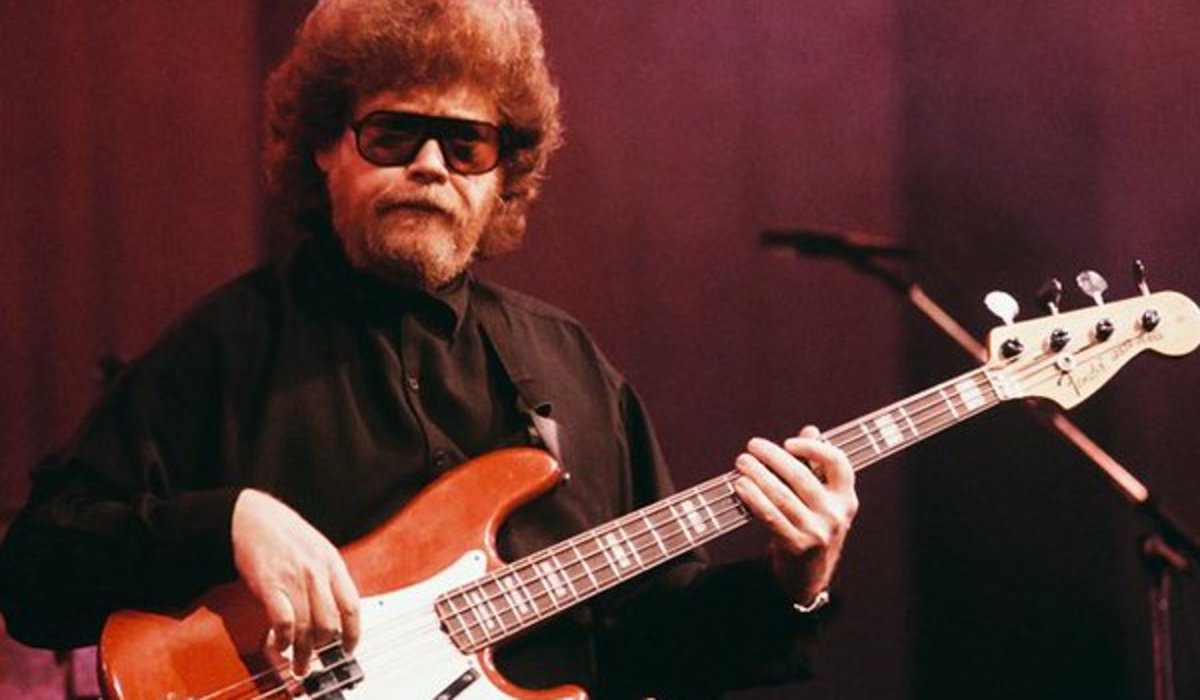 Donald "Duck" Dunn (November 24, 1941 – May 13, 2012) was an American bass guitarist, session musician, record producer, and songwriter. Dunn was notable for his 1960s recordings with Booker T. & the M.G.'s and as a session bassist for Stax Records. At Stax, Dunn played on thousands of records, including hits by Otis Redding, Sam & Dave, Rufus Thomas, Carla Thomas, William Bell, Eddie Floyd, Johnnie Taylor, Albert King, Elvis Presley and many others. In 1992, he was inducted in the Rock and Roll Hall of Fame as a member of Booker T. & the M.G.'s. He is ranked number 40 on Bass Player magazine's list of "The 100 Greatest Bass Players of All Time".

Dunn was born in Memphis, Tennessee. His father nicknamed him "Duck" while watching Disney cartoons with him one day. Dunn grew up playing sports and riding his bike with another future professional musician, Steve Cropper.

Cropper has noted how the self-taught Dunn started out playing along with records, filling in what he thought should be there. "That's why Duck Dunn's bass lines are very unique", Cropper said, "They're not locked into somebody's schoolbook somewhere". Axton's mother, Estelle, and her brother Jim Stewart owned Satellite Records and signed the band, who had a national hit with "Last Night" in 1961 under their new name, the "Mar-Keys". Dunn was the bassist on "Last Night", but he left the Mar-Keys in 1962 to join Ben Branch's big band.

Booker T. and the M.G.'s was founded by Cropper and Booker T. Jones in 1962, with the drummer Al Jackson, Jr.. The original bassist, on early hits such as "Green Onions", was Lewie Steinberg; Dunn replaced him in 1964.

Stax became known for Jackson's drum sound, the sound of the Memphis Horns, and Dunn's grooves. The MG's and Dunn's bass lines on songs like Otis Redding's "Respect" and "I Can't Turn You Loose", Sam & Dave's "Hold On, I'm Comin'", and Albert King's "Born Under a Bad Sign" influenced musicians everywhere.

As an instrumental group, they continued to experiment with the album McLemore Avenue (their reworking of the Beatles' Abbey Road) and on their final album, Melting Pot (1971), which featured basslines that to this day serve as a source of inspiration for hip-hop artists. In the 1970s, Jones and Cropper left Stax, but Dunn and Jackson stayed with the label. Dunn worked with Elvis Presley on his 1973 RCA Album Raised on Rock.

In 1971, when the rhythm guitarist Tom Fogerty left Creedence Clearwater Revival (CCR), the remaining members discussed with Dunn the possibility of his joining the group, with their current bassist, Stu Cook, moving to guitar. Booker T. and the MG's had performed in concert and jammed in the studio with CCR in the past, and Dunn in particular had become friends with the band members. However, CCR ultimately decided to remain a trio from then on.

Dunn went on to play for Muddy Waters, Freddie King, Jerry Lee Lewis, Eric Clapton and Rod Stewart. He was the featured bass player on the single "Stop Draggin' My Heart Around", by Stevie Nicks and Tom Petty, from Nicks's debut solo album Bella Donna (1981), and on other tracks by Petty between 1976 and 1981. He reunited with Cropper as a member of Levon Helm's RCO All Stars and also displayed his quirky Southern humor making two movies with Cropper, former Stax drummer Willie Hall, and Dan Aykroyd, as a member of the Blues Brothers band. Dunn was the bassist in Eric Clapton's band for Clapton's appearance at Live Aid in 1985.

Dunn played himself in the 1980 feature The Blues Brothers, where he famously uttered the line, "We had a band powerful enough to turn goat piss into gasoline!" and was frequently shown smoking a pipe whilst playing. He appeared in the 1998 sequel, Blues Brothers 2000, once again playing himself. Dunn & the MGs were the house band for Bob Dylan's concert celebrating Dylan's 30th anniversary in the music business at Madison Square Garden playing behind Dylan, George Harrison, Eric Clapton, Tom Petty, Stevie Wonder, Sinéad O'Connor, Eddie Vedder, and Neil Young, who recruited the MGs to tour with him and recorded with Dunn several times since.

In the 2000s Dunn was in semi-retirement, although he still performed occasionally with Booker T. & the MG's at clubs and music festivals.

In June 2004, Dunn, Cropper, and Jones served as the house band for Eric Clapton's Crossroads Guitar Festival. The group backed such guitarists as Joe Walsh and David Hidalgo on the main stage at the Cotton Bowl in Dallas, Texas.

In 2008, Dunn worked with the Australian soul singer Guy Sebastian touring for The Memphis Album. Dunn and Cropper arrived in Australia on February 20, 2008, to be Sebastian's backing band for an 18-date concert tour, the Memphis Tour.

Dunn is credited with performing on a version of the standard "I Ain't Got Nobody" with Jones, Cropper and Michel Gondry in Gondry's 2008 film Be Kind Rewind.

On the morning of May 13, 2012, Dunn died in his sleep after finishing his fifth double show at the Blue Note nightclub in Tokyo with Cropper the night before. He had been in Japan as part of an ongoing tour with Cropper and Eddie Floyd. He is survived by his wife, June; a son, Jeff; and a grandson, Michael.

When Dunn was 16, he acquired his first Fender Precision Bass, a 1958 model with sunburst body, one-piece maple neck and gold anodized pickguard, an instrument he owned until his death. Throughout his life, Dunn believed this was a '58 model, but after his passing, his son Jeff had work done on the bass, and the neck was inscribed "4-59," putting the date definitively as 1959. During the 1960s, he used a nearly identical 1959 model, but it was outfitted with a rosewood fretboard. He was an avid user of thick La Bella flatwound strings, as was James Jamerson.

While filming "The Blues Brothers," Dunn used a sunburst mid-sixties Fender Precision bass with a rosewood fretboard and a tortoise pickguard. He also used a red 1966 Precision in some of the scenes; a bass stamped "Demo" on the back, which was later fitted with a '70s Jazz Bass neck. It was a combination that was popular with other top-level players, including Carl Radle, and Billy Cox. This "Jazzision" became the basis for a Lakland Skyline Series signature bass made by the Chicago bass company Läkland nearly 20 years later. In 1980, with the popular Blues Brothers Band touring regularly, Fender gave Dunn a new bass to try, the company's first active electronics equipped model, the Precision Bass Special. Duck's bass (serial number E0xx009) was finished in his favorite color, Candy Apple Red, with a matching headstock, and featured a one-piece maple neck, and gold hardware. He played this bass briefly, before gifting it to a friend.

In the mid-1980s, after nearly three decades, Dunn switched from Fender instruments, and became an endorser for Peavey, a Mississippi-based company that had made a name for themselves with quality, USA-made gear. He played their Dyna Bass model—finished in his favorite red—on stage and in the studio for a number of years. Over the decades, he was given various basses by friends and admirers both, which included models by Travis Bean, Rickenbacker, Gibson, custom builders, and others, but his everyday instrument was always his Precision.

It was fellow studio legend Bob Glaub who introduced Duck to the people at Läkland, and based on his "Jazzision" bass from the Blues Brothers movie, the company's Duck Dunn signature model was released (still available as the model 44-64 Custom). It was on one of these basses that Duck played his final shows, and that bass remains with his son Jeff, complete with sweat streaks from his final moments of playing. In addition to those of Duck's basses that are displayed at Hard Rock Cafe locations, some are in museums (like the Rock & Roll Hall of Fame in Cleveland), and others are in the hands of private collectors.

Over the years, Dunn played through a "Fliptop" (the iconic Ampeg B-15 combo so named for its head that flipped over to store in the cabinet), as well as a Kustom 200 stack, and a Fender rig. He is best known for his use of an Ampeg SVT head and the company's matching 8×10" cabinet through his endorsement deal with Ampeg.

In 2007 Dunn and members of Booker T. & the MG's (Booker T. Jones, Steve Cropper and Lewie Steinberg), along with Barbara Jackson, the widow of Al Jackson, Jr., were given a Lifetime Achievement Grammy award for their contributions to popular music.

To learn more about the artist, please visit
https://en.wikipedia.org/wiki/Donald_
Back