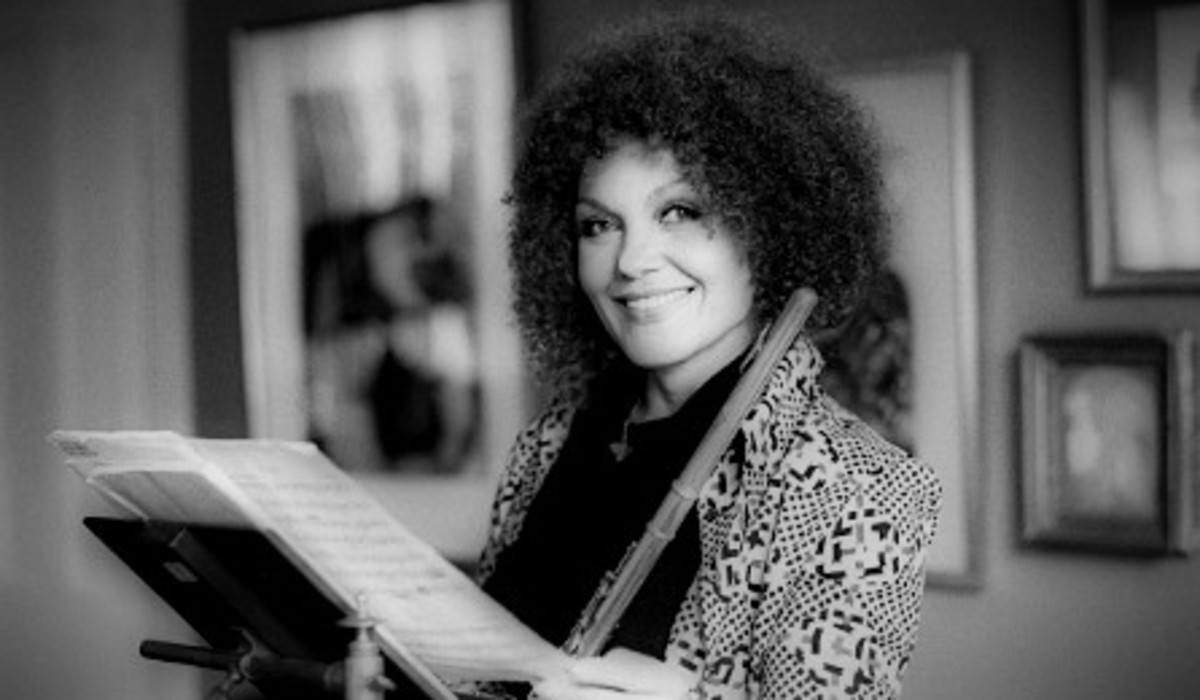 Dame Cleo Laine, Lady Dankworth, (born 28 October 1927) is an English jazz and pop singer and an actress, known for her scat singing and for her vocal range. Though her natural range is that of a contralto, she is able to produce a G above high C, giving her an overall compass of well over three octaves.

Laine is the only female performer to have received Grammy nominations in the jazz, popular and classical music categories. She is the widow of jazz composer Sir John Dankworth.

Laine was born Clementine Dinah Bullock in Uxbridge, Middlesex, to unmarried parents: Alexander Sylvan Campbell, a black Jamaican who worked as a building labourer and regularly busked, and Minnie Bullock, a white English farmer's daughter from Swindon, Wiltshire. The family moved round constantly, but most of Laine's childhood was spent in Southall. She attended the Board School there on Featherstone Road (later known as Featherstone Primary School) and was sent by her mother for singing and dancing lessons at an early age. She went on to attend Mellow Lane Senior School in Hayes before going to work as an apprentice hairdresser, a hat-trimmer, a librarian, and in a pawnbroker's shop.

In 1946, under the name Clementina Dinah Campbell, Laine married George Langridge, a roof tiler, with whom she had a son, Stuart. The couple divorced in 1957. It was not until 1953, when she was 26 and applying for a passport for a forthcoming tour of Germany, that Laine found out her real birth name, due to her parents not being married at the time and her mother registering her under her own name.

Laine did not take up singing professionally until her mid-twenties. Her early influences as a singer were Ella Fitzgerald, Sarah Vaughan and Lena Horne. She auditioned successfully, at the age of 24, for John Dankworth's small group, the Dankworth Seven, and later his orchestra, with which she performed until 1958. Dankworth and Laine married that year in secret at Hampstead Register Office. The only witnesses were the couple's friend, pianist Ken Moule, and Dankworth's arranger, David Lindup. The couple had two children, who are both successful musicians in their own right: Alec who lives in the US, and Jacqui, a British singer who has released a number of albums.

Laine began her career as a singer and actress. She played the lead in a new play at London's Royal Court Theatre, home of the new wave of playwrights of the 1950s such as John Osborne and Harold Pinter. This led to other stage performances, such as the musical Valmouth in 1959, the play A Time to Laugh (with Robert Morley and Ruth Gordon) in 1962, Boots With Strawberry Jam (with John Neville) in 1968, and eventually to her role as show-stopping Julie La Verne in Wendy Toye's production of Show Boat at the Adelphi Theatre in London in 1971. Show Boat had its longest run to date in that London season with 910 performances staged.

During this period, she had two major recording successes. "You'll Answer to Me" reached the British Top 10 while Laine was "prima donna" in the 1961 Edinburgh Festival production of Kurt Weill's opera/ballet The Seven Deadly Sins, directed and choreographed by Kenneth MacMillan. In 1964 her Shakespeare and All that Jazz album with Dankworth was well received. Dankworth and Laine founded the Stables theatre in 1970 in what was the old stables block in the grounds of their home. It was an immediate success, with 47 concerts given in the first year.

Laine's international activities began in 1972, with a successful first tour of Australia. Shortly afterwards, her career in the United States was launched with a concert at New York's Lincoln Center, followed in 1973 by the first of many Carnegie Hall appearances. Coast-to-coast tours of the US and Canada soon followed, and with them a succession of record albums and television appearances, including The Muppet Show in 1977. This led, after several nominations, to her first Grammy award, in recognition of the live recording of her 1983 Carnegie concert. She has continued to tour periodically, including in Australia in 2005.

She has collaborated with many well-known classical musicians including James Galway, Nigel Kennedy, Julian Lloyd Webber and John Williams.

Other important recordings during that time were duet albums with Ray Charles (Porgy and Bess) as well as Arnold Schoenberg's Pierrot Lunaire, which won Laine a classical Grammy nomination.

Laine's relationship with the musical theatre started in Britain and continued in the United States with starring performances in Sondheim's A Little Night Music and Franz Lehár's The Merry Widow (Michigan Opera). In 1980 she starred in Colette, a new musical by Dankworth. The show originally opened at the Stables theatre, Wavendon, in 1979 and transferred to the Comedy Theatre, London, in September 1980. In 1985 she originated the role of Princess Puffer in the Broadway hit musical The Mystery of Edwin Drood, for which she received a Tony nomination, and in 1989 she received the Los Angeles critics' acclaim for her portrayal of the Witch in Sondheim's Into the Woods.

In May 1992, Laine appeared with Frank Sinatra for a week of concerts at the Royal Albert Hall, London. She told a reporter in 2007: "I was very impressed with his singing, to me he sounded even better in those concerts than he did on the records. It was a real thrill to be part of his show."

Laine recorded more albums, including one with another jazz legend Mel Tormé (Nothing Without You). In 1991 she recorded the 12-track CD Jazz for the RCA label, which featured her vocals on classics such as "Lady Be Good", "St. Louis Blues" and "The Midnight Sun". The album also featured jazz musicians Gerry Mulligan, Clark Terry and Toots Thielemans.

She also returned to Carnegie Hall during the late 1990s to mark 25 years since her hit record Cleo – Live at Carnegie. Her performance was recorded and released as Cleo Laine – Live in Manhattan.

By the late 1990s, her concerts sold out across the globe, usually supported by Dankworth with his band, orchestra or smaller group. Her usual band included John Horler (piano), Alec Dankworth (bass), Allan Ganley (drums) and Mark Nightingale (trombone).

Laine's autobiography, Cleo, was published in September 1994 by Simon & Schuster. Her second book, You Can Sing If You Want To, was published by Victor Gollancz in October 1997. In 2000, she appeared as vocalist Gwen in the movie The Last of the Blonde Bombshells.

On 28 October 2007, Laine turned 80. She marked her birthday with a series of special concerts in Britain, including an appearance with the John Dankworth Sextet at Birmingham Town Hall on 18 December 2007. She said of her milestone birthday: "I don't think about being 80. What would be the point? I'm limping a bit because they've given me a new knee, but that's about the only difference. I don't want to start thinking about what I should or shouldn't be doing at my age. It's not right."

To celebrate the 80th birthdays of both Laine and Dankworth, Union Square Music released the four disc box set I Hear Music – the most comprehensive and lovingly produced examination of their careers ever assembled: Disc 1: Early Days (1944–56), Disc 2: John, Big Band and the Movies (1956–74), Disc 3: Focus On Cleo (1955–91), Disc 4: A Family Affair (including recordings made with their children, Alec and Jacqui, from 1982 to 2005). In 2008, Dankworth and Laine won the Gold Award at the BBC Jazz Awards. The couple got a standing ovation for their performance with Guy Barker's specially-assembled big band at the finale of the award ceremony.

A New York critic wrote of Laine and Dankworth's September 2008 engagement at Blue Note: "Dankworth’s alto sax and clarinet sound as gossamer as ever, while Laine’s voice remains a wonder of agility and plummy richness. After 57 years of dual music-making (and 50 of marriage), the Dankworths can anticipate one another’s every move; they make a stage seem as comfortable as their living room."

In 2010, Laine and her husband appeared in an episode of the CBeebies children's show ZingZillas. The episode was called "ScatZilla!".

In the 1997 New Year's Honours list, Laine became a Dame Commander, and she was appointed Dame Cleo Laine DBE. In the 2006 New Year's Honours list, her husband was made a knight bachelor, becoming Sir John Dankworth. They were one of the few couples where both partners held their titles in their own right and the only couple in jazz to be thus recognised.

Dankworth died on 6 February 2010, hours before a planned concert at the Stables theatre in Wavendon to celebrate the venue's 40th anniversary. He had been ill for several months following a concert tour in the United States. Despite her grief, Laine performed at the 40th anniversary concert, along with the John Dankworth Big Band and several members of her family – only announcing his death at the end. Laine's decision to perform featured on newspaper front pages all over the world, including a full photograph of her on the front page of The Times.

A week after Dankworth's death, Laine stepped in for her late husband and appeared again in concert at Pinner in north west London. Laine continued to perform and give interviews in the months following Dankworth's death. She appeared as a headline act at the Music in the Garden festival at Wavendon in June and July 2010.

In March 2010, Laine and Dankworth's final musical collaboration was released on CD and for download – Jazz Matters. The recording featured the Dankworth Big Band playing new compositions written by Dankworth for the couple's performance at the 2007 Proms at the Royal Albert Hall.

Laine is famed for not only her interpretative style, but also her almost-four-octave range and vocal adaptability. As well as hitting deep soulful notes, Laine's scatting and top notes have become her signature. Though her natural range is that of a contralto, she is able to produce a G above high C. Derek Jewel of the Sunday Times dubbed her "quite simply the best singer in the world."

A street in Adelaide, South Australia was named "Cleo Lane" after her.

To learn more about the artist, please visit
https://en.wikipedia.org/wiki/Cleo_Laine
Back