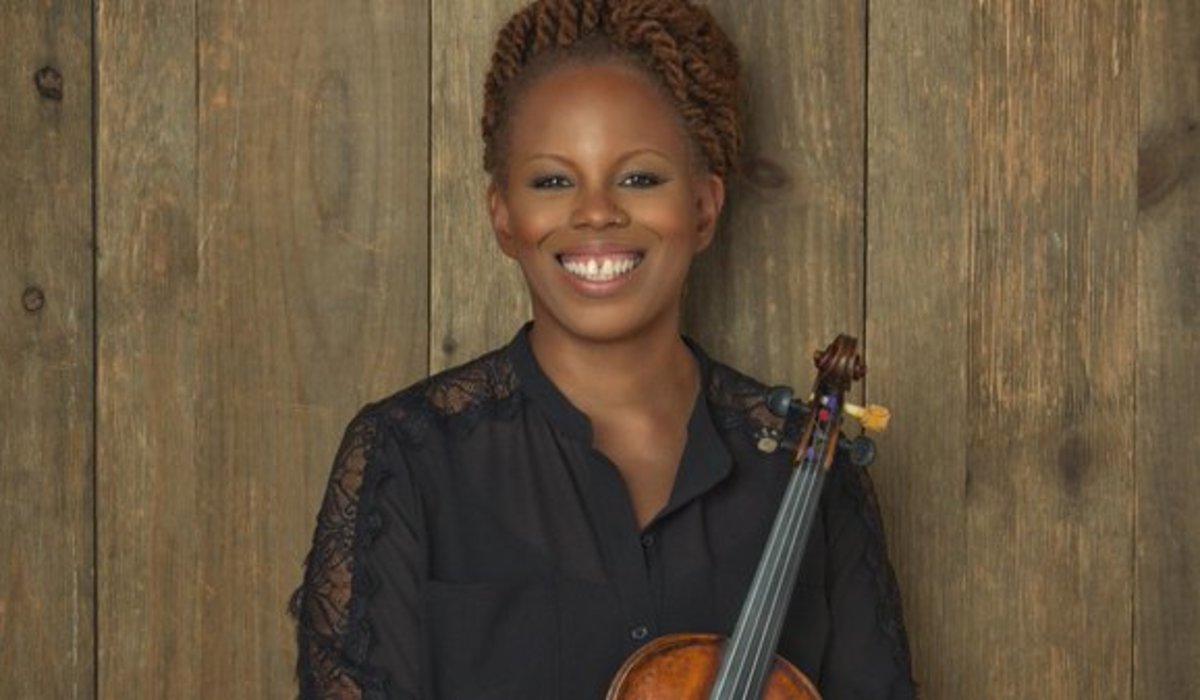 Regina Carter (Detroit, August 6, 1966) is an American jazz violinist. She is the cousin of jazz saxophonist James Carter.

Carter was born in Detroit and was one of three children in her family.

She began piano lessons at the age of two after playing a melody by ear for her brother's piano teacher. After she deliberately played the wrong ending note at a concert, the piano teacher suggested she take up the violin. She suggested that the Suzuki Method was more conducive to her creativity. Carter's mother enrolled her at the Detroit Community Music School when she was four years old and she began studying the violin. She still studied the piano, as well as tap and ballet.

As a teenager, she played in the youth division of the Detroit Symphony Orchestra. While at school, she was able to take master classes from Itzhak Perlman and Yehudi Menuhin.

Carter was studying classical violin at the New England Conservatory of Music in Boston when she decided to switch to jazz, but the school did not have that as a program. She transferred to Oakland University in Rochester, Michigan. Here she studied jazz with Marcus Belgrave. Through Belgrave Carter was able to meet a lot of people active in the Detroit jazz scene, including Lyman Woodard. She graduated in 1985. After graduating, she taught strings in Detroit public schools. Needing a change of scene, she moved to Europe and spent two years in Germany. While making connections, she worked as a nanny for a German family and taught violin on a U.S. military base.

Carter returned to the U.S. and first came into the spotlight as the violinist for the all female pop-jazz quintet Straight Ahead in 1987, with Cynthia Dewberry, Gailyn Mckinney, Eileen Orr, and Marion Hayden. In the early to mid-1990s, Branford Marsalis was quoted as saying, "They truly swing." They released a trio of albums on the Atlantic Jazz label including their self-titled debut, Body and Soul, and Look Straight Ahead. Carter went solo before the release of their third album, Dance of the Forest Rain, and established herself as a force in the jazz world on the violin. In 1991 she left the band and moved to New York City.

While in New York she was a relative unknown and undertook work accompanying performers such as Aretha Franklin, Lauryn Hill, Mary J. Blige, Billy Joel, and Dolly Parton. She also played with Max Roach and Oliver Lake, as well as being in the String Trio of New York. Carter worked on the albums Intermobility (1993), Octagon (1994), and Blues...? (1996) with the group.

While with the trio, she released her first solo CD, Regina Carter (1995). 1997 saw the release of her second solo album dedicated to her mother, entitled Something For Grace. She toured with Wynton Marsalis for the 1997 production Blood on the Fields. She then changed record companies, from Atlantic Records to Verve Music Group, which allowed her more artistic freedom and she released Rhythms of the Heart (1999).

She released Motor City Moments in 2000, paying homage to her hometown.

In December 2001, she played a concert in Genoa using Il Cannone Guarnerius, a violin that was made in 1743 and was once owned and favoured by Niccolò Paganini. The violin was bequeathed to Genoa after Paganini's death in 1840. The name of instrument is given because an "explosive" sound can be achieved. Carter was invited to play after the incidents of the September 11 attacks as a gesture of solidarity. She was both the first jazz musician and African American to play the instrument. She later recorded Paganini: After a Dreamfor Verve Records. The album featured classical works by Maurice Ravel and Claude Debussy, and Cinema Paradiso by Ennio Morricone.

Active as an educator, mentor, and proponent of the Suzuki method, Carter has taught at numerous institutions, including at Berklee College of Music, and two appearances at Stanford Jazz Workshop.

During the 2000s she performed at the head of a quintet. In May 2006, she was touring with Mark Krose (clarinet), Xavier Davis (piano), Alvester Garnett (drums)(still with her in 2011), and Matt Parish (Upright bass).

Carter was awarded a MacArthur Fellows Program grant, also known as a "genius grant", in September 2006. The award includes a grant of $500,000 over five years, and the committee stated this about Carter:

Regina Carter is a master of improvisational jazz violin. Though her work draws upon a wide range of musical influences – including Motown, Afro-Cuban, Swing, Bebop, Folk, and World – she has crafted a signature voice and style....Carter's performances highlight the often overlooked potential of the jazz violin for its lyric, melodic, and percussive potential. Her early training as a classical musician is reflected in the fluidity, grace, and balance of her performance. Carter's repertoire retains a firm connection with the familiar while venturing in new, unexpected directions....Through artistry with an instrument that has been defined predominantly by the classical tradition, Carter is pioneering new possibilities for the violin and for jazz.

Carter married Alvester Garnett in Detroit, Michigan, on September 5, 2004. They knew each other because Garnett plays drums in her band. She has been a resident of Maywood, New Jersey.

With the String Trio of New York

To learn more about the artist, please visit
https://en.wikipedia.org/wiki/Regina_Carter
Back