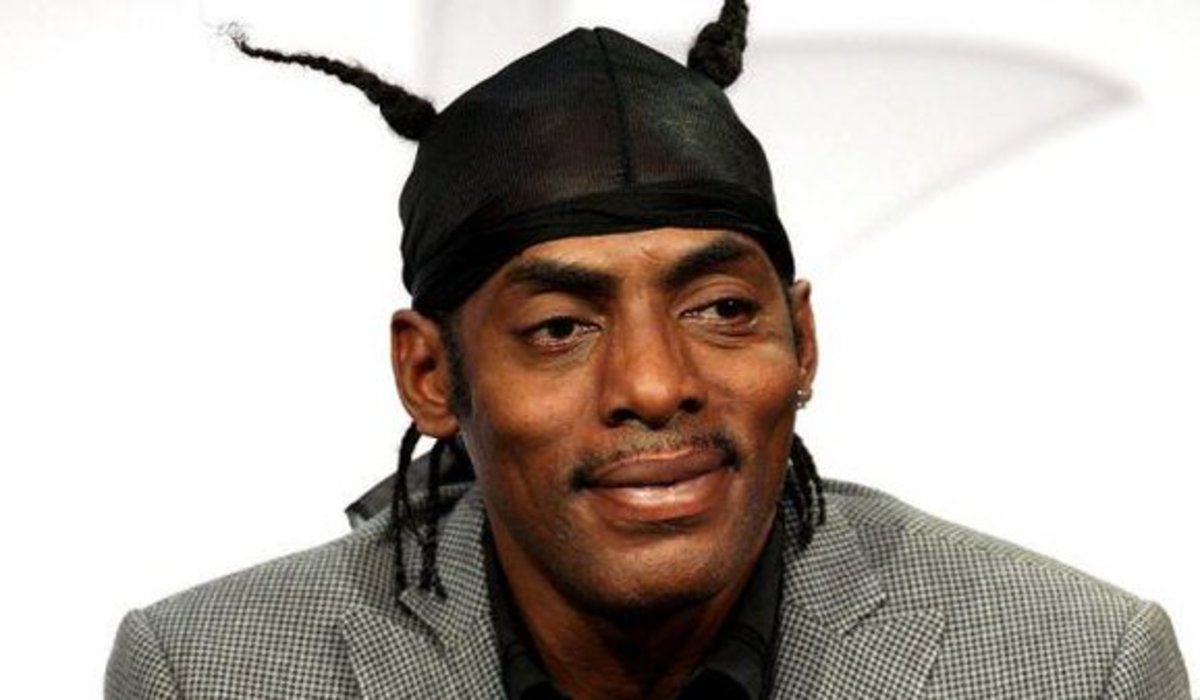 Artis Leon Ivey Jr. (born August 1, 1963), known professionally as Coolio, is an American rapper, actor, chef, and record producer. Coolio achieved mainstream success in the mid-to-late 1990s with his albums It Takes a Thief (1994), Gangsta's Paradise (1995), and My Soul (1997). He is best known for his 1995 Grammy Award-winning hit single "Gangsta's Paradise", as well as other singles "Fantastic Voyage" (1994), "1, 2, 3, 4 (Sumpin' New)" (1996) and "C U When U Get There" (1997). He was also known for rapping the theme song for the mid-to-late 1990s Nickelodeon series Kenan & Kel. Coolio has since gone on to release albums independently and has also become a chef, creating a web series titled Cookin' with Coolio and releasing a cookbook.

He recorded two singles in 1987, titled "Watcha Gonna Do" and "You're Gonna Miss Me". Coolio made connections in the L.A. rap scene, and in 1991, ended up joining the group WC and the Maad Circle, led by rapper WC. He was a co-contributor on the group's debut album Ain't a Damn Thang Changed, including on the single "Dress Code". The album was regionally successful.

Tommy Boy Records and It Takes a Thief

In 1994, Coolio signed to Tommy Boy Records and released his debut solo album It Takes a Thief. The lead single "Fantastic Voyage" received heavy rotation on MTV, and peaked at #3 on the Billboard Hot 100. "Fantastic Voyage" would become one of the biggest rap singles of the year, and the album contained a few other minor hits in "County Line" and "I Remember". It Takes a Thief peaked at #8 on the Billboard 200, becoming certified Platinum. The album received praise for bringing a humorous and lighthearted perspective to often violent and profane themes of typical gangsta rap.

In 1995, Coolio made a song featuring R&B singer LV for the movie Dangerous Minds, titled "Gangsta's Paradise". It would become one of the most successful rap songs of all time, reaching #1 on the Billboard Hot 100 for 3 weeks. It was the #1 single of 1995 for all genres, and was a global hit, as it reached #1 in the United States, United Kingdom, Ireland, France, Germany, Italy, Sweden, Austria, Netherlands, Norway, Switzerland, Australia, and New Zealand. The song also created a controversy when Coolio claimed that parody artist "Weird Al" Yankovic had not asked for permission to make his parody of "Gangsta's Paradise", titled "Amish Paradise". At the 1996 Grammy Awards, the song won Coolio a Grammy for Best Rap Solo Performance.

Originally "Gangsta's Paradise" was not meant to be included on one of Coolio's studio albums, but its success led to Coolio not only putting it on his next album but also making it the title track. The title track sampled the chorus and music of the song "Pastime Paradise" by Stevie Wonder, which was recorded nearly 20 years earlier on Stevie Wonder's album Songs in the Key of Life. The album Gangsta's Paradise was released in 1995 and was certified 2X Platinum by the RIAA. The album contained two other major hits in "1, 2, 3, 4 (Sumpin' New)" and "Too Hot" with J.T. Taylor of Kool & the Gang doing the chorus. Despite no longer being an official member of the group, Coolio made an appearance on the second WC and the Maad Circle album Curb Servin', on the song "In a Twist". In 1996, Coolio had another top 40 hit with the song "It's All the Way Live (Now)" from the soundtrack to the movie Eddie. He was also featured on the song "Hit 'em High" from the soundtrack to the movie Space Jam with B-Real, Method Man, LL Cool J, and Busta Rhymes.

In 2014, the band Falling in Reverse did a cover of "Gangster's Paradise" for "Punk Goes 90's", with Coolio making a cameo in the music video.

In 1996, Coolio appeared on the Red Hot Organization's compilation CD America is Dying Slowly, alongside Biz Markie, Wu-Tang Clan, and Fat Joe, among many other prominent hip-hop artists. The CD, meant to raise awareness of the AIDS epidemic among African American men, was heralded as "a masterpiece" by The Source magazine. That same year, he recorded the theme song and appeared in the opening sequence of the Nickelodeon TV series Kenan & Kel which ran for four seasons.

After the success of Gangsta's Paradise, Coolio's next album was expected to be another hit. His third solo album titled My Soul, came out in 1997. Although it contained the major hit "C U When U Get There" and the album went platinum, it failed to reach the success of his previous two albums. Coolio was dropped from Tommy Boy Records and his albums since then, 2001's Coolio.com, 2003's El Cool Magnifico, 2006's The Return of the Gangsta, and 2008's Steal Hear, have not charted on any Billboard chart. He did have a minor hit in the UK in 2006 with "Gangsta Walk" (featuring Snoop Dogg), which peaked at #67 on the UK pop chart. Both of his last albums were produced by Joshua Fenu and Vanni Giorgilli from Subside Records.

While touring with hip hop duo Insane Clown Posse, Coolio received a tattoo as a homage to the group's fanbase, reading "Jugalo Cool" [sic]. He stated that the misspelling was intentional. Coolio has performed at the Gathering of the Juggalos.

Coolio was featured on an international collaboration track called 'Fuck the DJ' by UK rapper Blacklisted MC also featuring Bizarre of D12, Adil Omar (from Pakistan) and Uzimon (from Bermuda) the song was premiered on music website Noisey from Vice in October 2014.

In 2004, Coolio appeared as a contestant on Comeback - Die große Chance (engl. Comeback - The Big Chance), a German talent show on which artists were looking for a comeback. Coolio placed third, after Chris Norman and Benjamin Boyce.

In 2009, Coolio appeared as a housemate on Celebrity Big Brother. He later went to appear on Ultimate Big Brother in 2010, where he decided it was best to leave the house after numerous confrontations with Nadia Almada and others in the house. In January 2012, he was one of eight celebrities participating in the Food Network reality series Rachael vs. Guy: Celebrity Cook-Off, where he represented the Music Saves Lives Organization. He came in second place with a Zagat score of 23 out of 30, losing to Lou Diamond Phillips. As runner-up, he was awarded $10,000 for his charity.

Coolio was featured on the March 5, 2013, episode of the ABC reality program Wife Swap, but his then girlfriend left him after the program was taped. On June 30, 2013, he appeared alongside comedian Jenny Eclair and Emmerdale actor Matthew Wolfenden on the UK game show Tipping Point: Lucky Stars, where he came second. Also on June 30, Coolio voiced a wax figure of himself on Gravity Falls. He also appeared on the "Homie-Work" episode of "The Nanny" with Fran Drescher in 1998. He portrayed a nerdy man, a "gift wrapper", transformed by the Jewish nanny into a "Rapper" for Maxwell Sheffield's new Rap musical.

Coolio and jazz saxophonist Jarez were enlisted in July 2008 as spokespersons by the group Environmental Justice and Climate Change to educate students at historically black colleges and universities about global warming. Coolio is a spokesperson for the Asthma and Allergy Foundation of America. He says that he and his children are asthma sufferers. As a child, he was taken to the hospital several times due to asthma complications.

Artis Leon Ivey Jr. was born in Compton, California. After attending Compton Community College, he worked various jobs such as volunteer firefighting and security at the Los Angeles International Airport before becoming a rapper.

In 1998, a court in Stuttgart sentenced Coolio to six months' probation and fined him $17,000 after convicting him of being an accessory to robbery and causing bodily injury.

Coolio appeared in the 2009 season of the British television show Celebrity Big Brother.

On September 17, 2016, Coolio and members of his crew were arrested for having a loaded firearm inside of a bookbag at Los Angeles International Airport. The bag was flagged by the Transportation Security Administration as the group attempted to pass through a security checkpoint. One of his bodyguards claimed ownership of the bag, but witnesses stated that it belonged to Coolio himself. On October 26, 2016, in an L.A. court, Coolio was placed on a 3-year probation and ordered to serve 45 days of community service for the crime.

On September 17, 2017, Coolio was denied entry into Singapore upon landing at Changi International Airport. Singapore's immigration and checkpoint authority declined to comment on the reason for confidentiality reasons. Coolio was travelling from Beijing to Singapore to perform at a Formula One concert event.

Coolio has made numerous appearances in television and movies, mostly small roles or cameos.

The American Music Awards is an annual awards ceremony created by Dick Clark in 1973. Coolio has received one award from two nominations.

The Grammy Awards are awarded annually by the National Academy of Recording Arts and Sciences of the United States. Coolio has received one award from six nominations.

The MTV Video Music Awards is an annual awards ceremony established in 1984 by MTV. Coolio has received three awards from six nominations.

To learn more about the artist, please visit
https://en.wikipedia.org/wiki/Coolio
Back