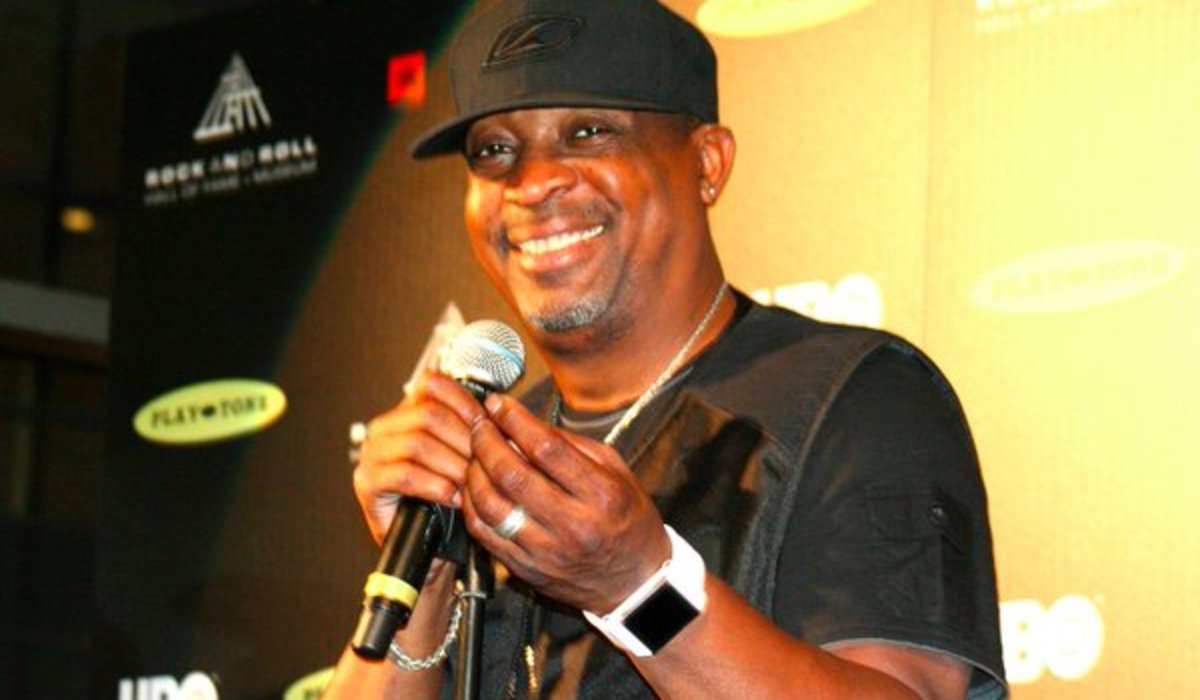 Ridenhour was born in Queens, New York. He began writing rhymes after the New York City blackout of 1977. After graduating from Roosevelt Junior-Senior High School, he went to Adelphi University on Long Island to study graphic design, where he met William Drayton (Flavor Flav). He received a B.F.A. from Adelphi in 1984 and later received an honorary doctorate from Adelphi in 2013.

Their major label albums were Yo! Bum Rush the Show (1987), It Takes a Nation of Millions to Hold Us Back (1988), Fear of a Black Planet (1990), Apocalypse 91... The Enemy Strikes Black (1991), Greatest Misses (1992), and Muse Sick-n-Hour Mess Age (1994). They also released a full-length album soundtrack for the film He Got Game in 1998. Ridenhour also contributed (as Chuck D) to several episodes of the PBS documentary series The Blues. He has appeared as a featured artist on many other songs and albums, having collaborated with artists such as Janet Jackson, Kool Moe Dee, The Dope Poet Society, Run–D.M.C., Ice Cube, Boom Boom Satellites, Rage Against the Machine, Anthrax, John Mellencamp and many others. In 1990, he appeared on "Kool Thing", a song by the alternative rock band Sonic Youth, and along with Flavor Flav, he sang on George Clinton's song "Tweakin'", which appears on his 1989 album The Cinderella Theory. In 1993, he executive produced Got 'Em Running Scared, an album by Ichiban Records group Chief Groovy Loo and the Chosen Tribe.

In 1996, Ridenhour released Autobiography of Mistachuck on Mercury Records. Chuck D made a rare appearance at the 1998 MTV Video Music Awards, presenting the Video Vanguard Award to the Beastie Boys, whilst commending their musicianship. In November 1998, he settled out of court with Christopher "The Notorious B.I.G." Wallace's estate over the latter's sampling of his voice in the song "Ten Crack Commandments". The specific sampling is Ridenhour counting off the numbers one to nine on the track "Shut 'Em Down". He later described the decision to sue as "stupid."

In September 1999, he launched a multi-format "supersite" on the web site Rapstation.com. A home for the vast global hip hop community, the site boasts a TV and radio station with original programming, many of hip hop's most prominent DJs, celebrity interviews, free MP3 downloads (the first was contributed by multi-platinum rapper Coolio), downloadable ringtones by ToneThis, social commentary, current events, and regular features on turning rap careers into a viable living. Since 2000, he has been one of the most vocal supporters of peer-to-peer file sharing in the music industry.

He loaned his voice to Grand Theft Auto: San Andreas as DJ Forth Right MC for the radio station Playback FM. In 2000, he collaborated with Public Enemy's Gary G-Whiz and MC Lyte on the theme music to the television show Dark Angel. He appeared with Henry Rollins in a cover of Black Flag's "Rise Above" for the album Rise Above: 24 Black Flag Songs to Benefit the West Memphis Three. He was also featured on Z-Trip's album Shifting Gears on a track called "Shock and Awe"; a 12-inch of the track was released featuring artwork by Shepard Fairey. In 2008 he contributed a chapter to Sound Unbound: Sampling Digital Music and Culture (The MIT Press, 2008) edited by Paul D. Miller a.k.a. DJ Spooky, and also turned up on The Go! Team's album Proof of Youth on the track "Flashlight Fight." He also fulfilled his childhood dreams of being a sports announcer by performing the play-by-play commentary in the video game NBA Ballers: Chosen One on Xbox 360 and PlayStation 3.

In 2009, Ridenhour wrote the foreword to the book The Love Ethic: The Reason Why You Can't Find and Keep Beautiful Black Love by Kamau and Akilah Butler. He also appeared on Brother Ali's album, Us.

In March 2011, Chuck D re-recorded vocals with The Dillinger Escape Plan for a cover of "Fight the Power".

Chuck D duetted with Rock singer Meat Loaf on his 2011 album Hell in a Handbasket on the song "Mad Mad World/The Good God Is a Woman and She Don't Like Ugly".

In 2016 Chuck D joined the band Prophets of Rage along with B-Real and former members of Rage Against the Machine.

Chuck D is known for his powerful rapping voice - How to Rap says, "Chuck D of Public Enemy has a powerful, resonant voice that is often acclaimed as one of the most distinct and impressive in hip-hop". Chuck D says this was based on listening to Melle Mel and sportscasters such as Marv Albert.

Chuck D often comes up with a title for a song first and that he writes on paper, though he sometimes edits using a computer. He also prefers to not punch in vocals, and he prefers to not overdub vocals.

Ridenhour is politically active; he co-hosted Unfiltered on Air America Radio, testified before Congress in support of peer-to-peer MP3 sharing, and was involved in a 2004 rap political convention. He continues to be an activist, publisher, lecturer, and producer. Addressing the negative views associated with rap music, he co-wrote the essay book Fight the Power: Rap, Race, and Reality, along with Yusuf Jah. He argues that "music and art and culture is escapism, and escapism sometimes is healthy for people to get away from reality", but sometimes the distinction is blurred and that's when "things could lead a young mind in a direction." He also founded the record company Slam Jamz and acted as narrator in Kareem Adouard's short film Bling: Consequences and Repercussions, which examines the role of conflict diamonds in bling fashion. Despite Chuck D and Public Enemy's success, Chuck D claims that popularity or public approval was never a driving motivation behind their work. He is admittedly skeptical of celebrity status, revealing in a 1999 interview with BOMB Magazine that, "The key for the record companies is to just keep making more and more stars, and make the ones who actually challenge our way of life irrelevant. The creation of celebrity has clouded the minds of most people in America, Europe and Asia. It gets people off the path they need to be on as individuals."

In an interview with Le Monde published January 29, 2008, Chuck D stated that rap is devolving so much into a commercial enterprise, that the relationship between the rapper and the record label is that of slave to a master. He believes that nothing has changed for African-Americans since the debut of Public Enemy and, although he thinks that an Obama-Clinton alliance is great, he does not feel that the establishment will allow anything of substance to be accomplished. He also stated that French President Sarkozy is like any other European elite: he has profited through the murder, rape, and pillaging of those less fortunate and he refuses to allow equal opportunity for those men and women from Africa. In this article, he also defended a comment made by Professor Griff in the past that he says was taken out of context by the media. The real statement was a critique of the Israeli government and its treatment of the Palestinian people. Chuck D stated that it is Public Enemy's belief that all human beings are equal.

In an interview with the magazine N'Digo published in late June 2008, he spoke of today's mainstream urban music seemingly relishing the addictive euphoria of materialism and sexism, perhaps being the primary cause of many people harboring resentment towards the genre and its future. However he has expressed hope for its resurrection, saying "It's only going to be dead if it doesn't talk about the messages of life as much as the messages of death and non-movement", citing artists such as NYOil, M.I.A. and The Roots as socially conscious artists who push the envelope creatively. "A lot of cats are out there doing it, on the Web and all over. They're just not placing their career in the hands of some major corporation."

Most recently Chuck D became involved in Let Freedom Sing: The Music of the Civil Rights, a 3-CD box set from Time Life. He wrote the introduction to the liner notes and is visiting colleges across the nation discussing the significance of the set. He's also set to appear in a follow up movie called Let Freedom Sing: The Music That Inspired the Civil Rights Movement.

In 2010, Chuck D released a track entitled "Tear Down That Wall". He said, "I talked about the wall not only just dividing the U.S. and Mexico but the states of California, New Mexico and Texas. But Arizona, it's like, come on. Now they're going to enforce a law that talks about basically racial profiling."

He is on the board of the TransAfrica Forum, a Pan African organization that is focused on African, Caribbean and Latin American issues.

He is a pescatarian.

with Prophets of Rage

To learn more about the artist, please visit
https://en.wikipedia.org/wiki/Chuck_D
Back