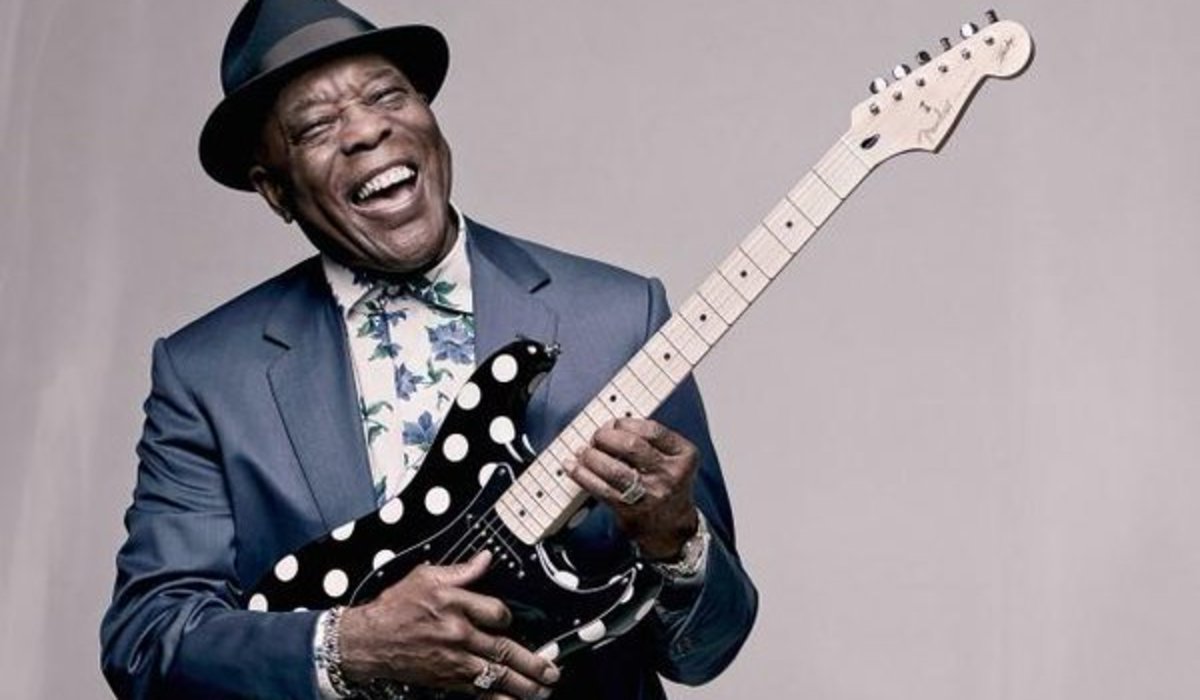 George "Buddy" Guy (born July 30, 1936) is an American blues guitarist and singer. He is an exponent of Chicago blues and has influenced eminent guitarists including Eric Clapton, Jimi Hendrix, Jimmy Page, Keith Richards, Stevie Ray Vaughan, Jeff Beck and John Mayer. In the 1960s, Guy played with Muddy Waters as a house guitarist at Chess Records and began a musical partnership with the harmonica player Junior Wells.

Guy was ranked 30th in Rolling Stone magazine's "100 Greatest Guitarists of All Time". His song "Stone Crazy" was ranked 78th in the Rolling Stone list of the "100 Greatest Guitar Songs of All Time". Clapton once described him as "the best guitar player alive". In 1999, Guy wrote the book Damn Right I've Got the Blues, with Donald Wilcock. His autobiography, When I Left Home: My Story, was published in 2012.

Guy was born and raised in Lettsworth, Louisiana. He began learning to play the guitar using a two-string diddley bow he made. Later he was given a Harmony acoustic guitar, which, decades later in Guy's lengthy career, was donated to the Rock and Roll Hall of Fame.

In the early 1950s Guy began performing with bands in Baton Rouge. While living there, he worked as a custodian at Louisiana State University.

Soon after moving to Chicago on September 25, 1957, Guy fell under the influence of Muddy Waters. In 1958, a competition with West Side guitarists Magic Sam and Otis Rush gave Guy a record contract. Soon afterwards he recorded for Cobra Records. He recorded sessions with Junior Wells for Delmark Records under the pseudonym Friendly Chap in 1965 and 1966.

Guy’s early career was impeded by conservative business choices made by his record company, Chess Records, his label from 1959 to 1968, which refused to record Guy playing in the novel style of his live shows. Leonard Chess, Chess Records founder, denounced Guy’s playing as "noise". In the early 1960s, Chess tried recording Guy as a solo artist with R&B ballads, jazz instrumentals, soul and novelty dance tunes, but none of these recordings were released as a single. Guy’s only Chess album, I Left My Blues in San Francisco, was released in 1967. Most of the songs belong stylistically to the era's soul boom, with orchestrations by Gene Barge and Charlie Stepney. Chess used Guy mainly as a session guitarist to back Muddy Waters, Howlin' Wolf, Little Walter, Sonny Boy Williamson, Koko Taylor and others.

Guy's career took off during the blues revival of the late 1980s and early 1990s. It was sparked by Clapton's request that Guy be part of the "24 Nights" all-star blues guitar lineup at London's Royal Albert Hall. Guy subsequently signed with Silvertone Records.

Guy performs a month of shows each January at his Chicago blues club, Buddy Guy's Legends.

In 2015, Alan Harper, a British blues fan, published the book Waiting for Buddy Guy: Chicago Blues at the Crossroads.

While Guy's music is often labelled Chicago blues, his style is unique and separate. His music can vary from the most traditional, deepest blues to a creative, unpredictable and radical gumbo of the blues, avant rock, soul and free jazz that changes with each performance.

Mr. Guy, 68, mingles anarchy, virtuosity, deep blues and hammy shtick in ways that keep all eyes on him.... [Guy] loves extremes: sudden drops from loud to soft, or a sweet, sustained guitar solo followed by a jolt of speed, or a high, imploring vocal cut off with a rasp.... Whether he's singing with gentle menace or bending new curves into a blue note, he is a master of tension and release, and his every wayward impulse was riveting.

In an interview taped on April 14, 2000, for the Cleveland college station WRUW-FM, Guy said,

The purpose of me trying to play the kind of rocky stuff is to get airplay...I find myself kind of searching, hoping I'll hit the right notes, say the right things, maybe they'll put me on one of these big stations, what they call 'classic'...if you get Eric Clapton to play a Muddy Waters song, they call it classic, and they will put it on that station, but you'll never hear Muddy Waters.

For almost 50 years, Guy has performed flamboyant live concerts of energetic blues and blues rock, predating the 1960s blues rockers. As a musician, he had a fundamental impact on the blues and on rock and roll, influencing a new generation of artists.

Guy has been called the bridge between the blues and rock and roll. He is one of the historic links between Chicago electric blues pioneers Muddy Waters and Howlin' Wolf and popular musicians like Eric Clapton, Jeff Beck, Jimi Hendrix, Jimmy Page and later revivalists like Stevie Ray Vaughan. Vaughan stated that "Without Buddy Guy, there would be no Stevie Ray Vaughan." Guitaristmagazine observed,

Buddy can go from one end of the spectrum to another. He can play quieter than anybody I've ever heard, or wilder and louder than anybody I've ever heard. I play pretty loud a lot of times, but Buddy's tones are incredible. He pulls such emotion out of so little volume. Buddy just has this cool feel to everything he does. And when he sings, it's just compounded. Girls fall over and sweat and die! Every once in a while I get the chance to play with Buddy, and he gets me every time, because we could try to go to Mars on guitars but then he'll start singing, sing a couple of lines, and then stick the mike in front of me! What are you going to do? What is a person going to do?!

Geez, you can't forget Buddy Guy. He transcended blues and started becoming theater. It was high art, kind of like drama theater when he played, you know. He was playing behind his head long before Hendrix. I once saw him throw the guitar up in the air and catch it in the same chord.

Beck recalled the night he and Vaughan performed with Guy at Buddy Guy's Legends club in Chicago: "That was just the most incredible stuff I ever heard in my life. The three of us all jammed and it was so thrilling. That is as close you can come to the heart of the blues."

According to Jimmy Page, "Buddy Guy is an absolute monster." "There were a number of albums that everybody got tuned into in the early days. There was one in particular called, I think, American Folk Festival Of The Blues, which featured Buddy Guy. He just astounded everybody."

Singer-songwriter and guitarist John Mayer, who has performed with Guy on numerous occasions (including Clapton's Crossroads Guitar Festival and on the PBS television program Soundstage) and collaborated with him on Guy's 2005 album Bring 'Em In, has stated on several occasions that Guy was one of his top influences.

Guitar Legends do not come any better than Buddy Guy. He is feted by his peers and loved by his fans for his ability to make the guitar both talk and cry the blues. Such is Buddy's mastery of the guitar that there is virtually no guitarist that he cannot imitate.

Guy opened for the Rolling Stones on numerous tours, beginning in the early 1970s. Slash said that "Buddy Guy is the perfect combination of R&B and hardcore rock and roll." ZZ Top's Billy Gibbons said, "He ain't no trickster. He may appear surprised by his own instant ability, but clearly, he knows what's up."

He was a judge for the 6th and 8th annual Independent Music Awards to support independent artists.

He appeared as the "King of Swing" and performed in an episode of the popular children's show Jack's Big Music Show.

He is mentioned by name in the song "Saint Chicago" by Chicago musician Little Lord Robert.

Guy has influenced the styles of subsequent artists such as Reggie Sears and Jesse Marchant of JBM.

On February 21, 2012, Guy performed in concert at the White House for President Barack Obama and First Lady Michelle Obama. During the finale of the concert, he persuaded the President to sing a few bars of "Sweet Home Chicago".

On September 20, 1996, Guy was inducted into Guitar Center's Hollywood Rockwalk.

Guy has won seven Grammy Awards, for his work on electric and acoustic guitars and for contemporary and traditional forms of blues music.

In 2003, he was presented with the National Medal of Arts, awarded by the President of the United States to those who have made extraordinary contributions to the creation, growth and support of the arts in the United States.

By 2004, Guy had also earned 23 W.C. Handy Awards, Billboard magazine's Century Award (he was its second recipient) for distinguished artistic achievement, and the title of Greatest Living Electric Blues Guitarist.

Guy was inducted into the Rock and Roll Hall of Fame on March 14, 2005, by Eric Clapton and B.B. King. Clapton recalled seeing Guy perform in London’s Marquee Club in 1965, impressing him with his technique, his looks and his charismatic showmanship. He remembered seeing Guy pick the guitar with his teeth and play it over his head—two tricks that later influenced Jimi Hendrix. Guy’s acceptance speech was concise: "If you don’t think you have the blues, just keep living." He had previously served on the nominating committee of the Rock and Roll Hall of Fame.

In 2008, Guy was inducted into the Louisiana Music Hall of Fame, performing at the Texas Club in Baton Rouge to commemorate the occasion.

In October 2009, he performed "Let Me Love You Baby" with Jeff Beck at the 25th anniversary concert at the Rock & Roll Hall of Fame.

On November 15, 2010, he performed a live set for Guitar Center Sessions on DirecTV. The episode also included an interview with Guy by program host Nic Harcourt.

On December 2, 2012, Guy was awarded the 2012 Kennedy Center Honors. At his induction, Kennedy Center chairman David Rubenstein said, "Buddy Guy is a titan of the blues and has been a tremendous influence on virtually everyone who has picked up an electric guitar in the last half century". He was honored that night along with Dustin Hoffman, Led Zeppelin (John Paul Jones, Jimmy Page and Robert Plant), David Letterman and Natalia Makarova.

On January 28, 2014, Guy was inducted into Musicians Hall of Fame and Museum.

Born to Play Guitar won a Grammy Award in 2016 for Best Blues Album. Also in 2016, Guy toured the US east coast as the opening act for Jeff Beck.

Buddy Guy was born as George Guy to Sam and Isabel Guy in Lettsworth, Louisiana. He was one of five children born to the couple. His brother Phil Guy was also a blues musician.

He was married to Jennifer Guy from 1975 to 2002. They have two children together; Rashawnna and Michael. The marriage ended in divorce. Rashawnna Guy, better known by her stage name Shawnna is a rapper.

To learn more about the artist, please visit
https://en.wikipedia.org/wiki/Buddy_Guy
Back