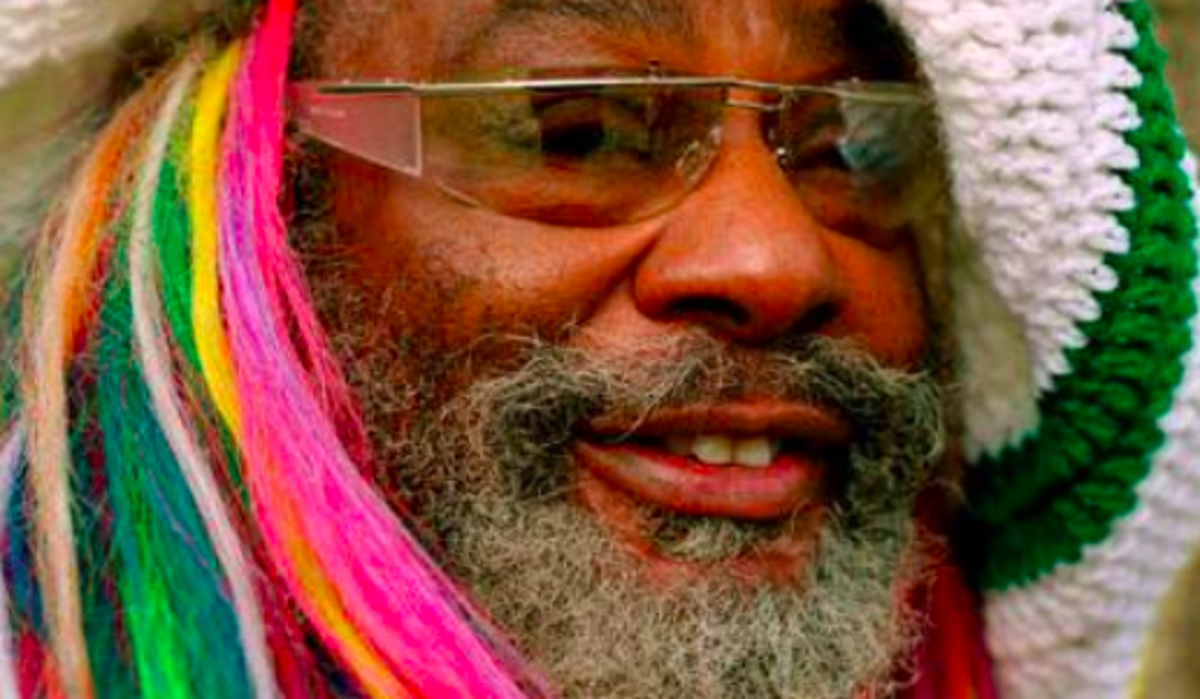 George Edward Clinton (born July 22, 1941) is an American singer, songwriter, bandleader, and record producer. His Parliament-Funkadelic collective (which primarily recorded under the distinct band names Parliament and Funkadelic) developed an influential and eclectic form of funk music during the 1970s that drew on science-fiction, outlandish fashion, psychedelic culture, and surreal humor. He launched a solo career in 1981, and would go on to influence 1990s hip-hop and G-funk. He is regarded, along with James Brown and Sly Stone, as one of the foremost innovators of funk music. He was inducted into the Rock and Roll Hall of Fame in 1997, alongside 15 other members of Parliament-Funkadelic.

Clinton was born in Kannapolis, North Carolina, grew up in Plainfield, New Jersey, and currently resides in Tallahassee, Florida. During his teen years Clinton formed a doo-wop group inspired by Frankie Lymon & the Teenagers called The Parliaments, while straightening hair at a barber salon in Plainfield.

The West End of Plainfield, New Jersey was once home to the Silk Palace, a barbershop at 216 Plainfield Avenue owned in part by Clinton, staffed by various members of Parliament-Funkadelic and known as the "hangout for all the local singers and musicians" in Plainfield's 1950s and 1960s doo-wop, soul, rock and proto-funk music scene.

For a period in the 1960s Clinton was a staff songwriter for Motown. Despite initial commercial failure and one major hit single, ("(I Wanna) Testify" in 1967), as well as arranging and producing scores of singles on many of the independent Detroit soul music labels, The Parliaments eventually found success under the names Parliament and Funkadelic in the 1970s (see also P-Funk). These two bands combined the elements of musicians such as Jimi Hendrix, Sly and the Family Stone, Frank Zappa, and James Brown while exploring various sounds, technology, and lyricism. Clinton and Parliament-Funkadelic dominated diverse music during the 1970s with over 40 R&B hit singles (including three number ones) and three platinum albums.

From 1971 to late 1973, Clinton and several other members of the band settled in Toronto. During the years in Toronto, they honed their live show and recorded the album America Eats Its Young, which was their first to feature Bootsy Collins.

Clinton's efforts as a solo artist began in 1982. He is also a notable music producer who works on almost all the albums he performs on, and has produced albums for Bootsy Collins and Red Hot Chili Peppers, among others. Beginning in the early 1980s, Clinton recorded several nominal solo albums, although all of these records featured contributions from P-Funk's core musicians. The primary reason for recording under his own name was legal difficulties, due to the complex copyright and trademark issues surrounding the name "Parliament" (primarily) and Polygram's purchase of that group's former label Casablanca Records.

In 1982, Clinton signed to Capitol Records under two names: his own (as a solo artist) and as the P-Funk All-Stars, releasing Computer Games under his own name that same year. The single "Loopzilla" hit the Top 20 on the R&B charts, followed by "Atomic Dog", which reached #1 R&B and #101 on the pop chart. In the next four years, Clinton released three more studio albums (You Shouldn't-Nuf Bit Fish, Some of My Best Jokes Are Friends, and R&B Skeletons in the Closet) as well as a live album, Mothership Connection (Live from the Summit, Houston, Texas) and charting three singles in the R&B Top 30, "Nubian Nut", "Last Dance", and "Do Fries Go with That Shake?". This period of Clinton's career was marred by multiple legal problems (resulting in financial difficulties) due to complex royalty and copyright issues, notably with Bridgeport Music, who Clinton claims fraudulently obtained the copyrights to many of his recordings.

In 1985, he was recruited by the Red Hot Chili Peppers to produce their album Freaky Styley, because the band members were huge fans of George Clinton's and of funk in general. Clinton, in fact, wrote the vocals and lyrics to the title track which was originally intended by the band to be left as an instrumental piece. The album was not a commercial success at the time, but has since sold 500,000 copies after the Red Hot Chili Peppers became popular years later.

During the mid to late 1980's, many hip-hop and rap artists cited Clinton's earlier music as an influence. Along with James Brown, Clinton's songs with Parliament-Funkadelic were often sampled by rap producers. "Sure, sample my stuff…" he remarked in 1996. "Ain't a better time to get paid than when you're my age. You know what to do with money. You don't buy as much pussy or drugs with it – you just buy some."

In 1989, Clinton released The Cinderella Theory on Paisley Park, Prince's record label. This was followed by Hey Man, Smell My Fingerin 1993. Clinton then signed with Sony 550 and released T.A.P.O.A.F.O.M. (The Awesome Power of a Fully Operational Mothership) in 1996, having reunited with several former members of Parliament and Funkadelic.

1994 saw Clinton contribute to several tracks on Primal Scream's studio album Give Out But Don't Give Up. In 1995, Clinton sang "Mind Games" on the John Lennon tribute Working Class Hero. In the 1990s, Clinton appeared in films such as Graffiti Bridge (1990), House Party (1990), PCU (1994), Good Burger (1997), and The Breaks (1999). In 1997, he appeared as himself in the Cartoon Network show Space Ghost Coast to Coast. Clinton also appeared as the voice of The Funktipus, the DJ of the Funk radio station Bounce FM in the 2004 video game, Grand Theft Auto: San Andreas, in which his song "Loopzilla" also appeared.

Rapper Dr. Dre sampled most of Clinton's beats to create his G-Funk music era. In 1999, Clinton collaborated with Lil' Kim, Fred Durst, and Mix Master Mike for Methods of Mayhem's single "Get Naked".

Clinton founded a record label called The C Kunspyruhzy in 2003. He had a cameo appearance in "Where Were We?", the season two premiere of the CBS television sitcom How I Met Your Mother, on September 18, 2006.

Clinton wrote "You're Thinking Right", the theme song for The Tracey Ullman Show. He appeared on the intro to Snoop Dogg's Tha Blue Carpet Treatment album, released in 2007. Clinton was also a judge for the 5th annual Independent Music Awards to support independent artists' careers.

Also in 2009, Clinton was inducted into the North Carolina Music Hall of Fame.

On March 7, 2010, Clinton voiced a colorful blob alien version of himself in T-Pain's Adult Swim television movie Freaknik: The Musical.

In May 2012, Clinton was awarded an Honorary Doctorate of Music from Berklee College of Music. During the commencement concert, Clinton joined the college's P-Funk Ensemble to perform hits like “Testify,” “Give Up the Funk,” and “One Nation Under a Groove." He was accompanied by longtime horn players Bennie Cowan and Greg Thomas.

Clinton was a guest star in Odd Future's television show Loiter Squad on Adult Swim in 2013.

On June 27, 2015, Clinton joined Mark Ronson, Mary J. Blige and Grandmaster Flash on stage at the Glastonbury Festival to perform Ronson's hit Uptown Funk. Clinton also appears with Kendrick Lamar on the song "Wesley's Theory" from the album To Pimp a Butterfly.

Clinton and the Parliament Funkadelic are slated to headline the seventh annual Treefort Music Fest in Boise, Idaho in 2018.The release of a new album was announced in March 2018. The release date is still unknown.

In April 2018, Clinton announced that he would retire from touring in May 2019. Billboard reported that Clinton had recently undergone pacemaker surgery, but he said that was not a factor in his decision. He indicated that he expected Parliament-Funkadelic would continue to tour without him, saying "Truth be told, it's never really been about me. It's always been about the music and the band. That's the real P-Funk legacy. They'll still be funkin' long after I stop." Earlier in 2018, he told Rolling Stone that he had made a hologram, suggesting that the band could "have it start performing in Vegas".

On February 1, 2010, Clinton's son, George Clinton, Jr., was found dead in his Florida home. According to police, he had been dead for several days and died of natural causes.

Clinton married Stephanie Lynn Clinton in 1990. In February 2013, after 22 years of marriage, he filed for divorce.

To learn more about the artist, please visit
https://en.wikipedia.org/wiki/George_Clinton_(musician)
Back