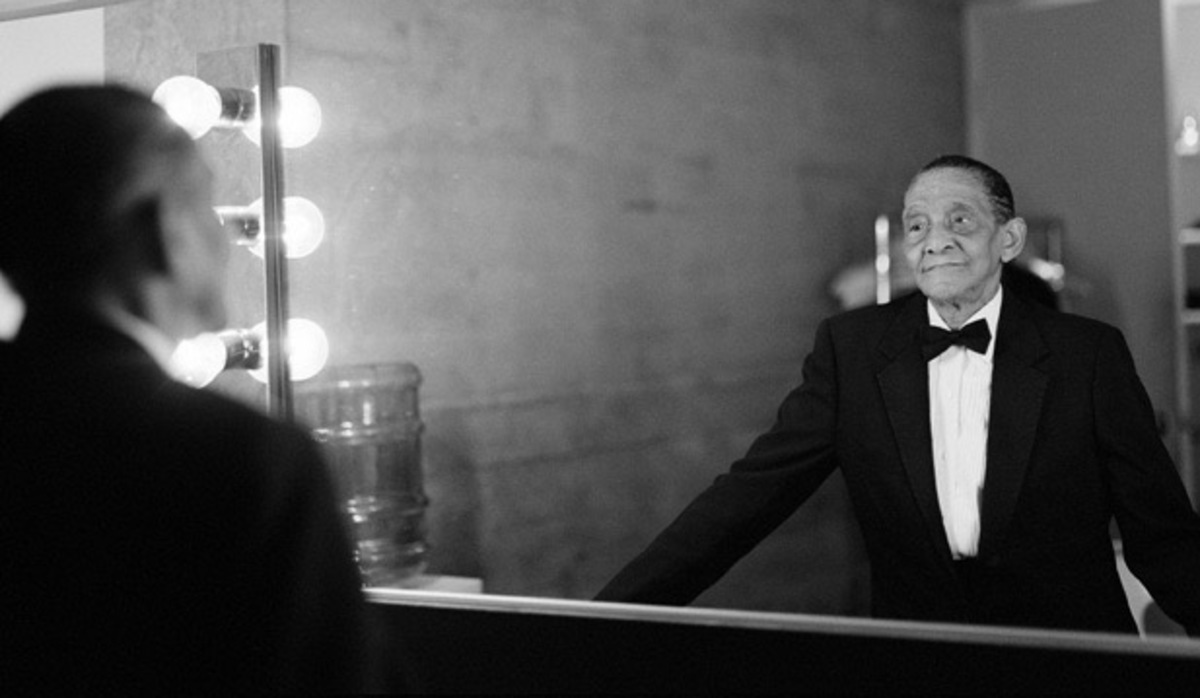 James Victor Scott (July 17, 1925 – June 12, 2014), often credited as Little Jimmy Scott or Jimmy Scott, was an American jazz vocalist famous for his high countertenor voice and his sensitivity on ballads and love songs.

After success in the 1940s and 1950s, Scott's career faltered in the early 1960s. He slid into obscurity before launching a comeback in the 1990s. His unusual singing voice was due to Kallmann syndrome, a rare genetic disorder that limited his height to 4 feet 11 inches (150 cm) until the age of 37, when he grew by 8 inches (20 cm). The syndrome prevented him from reaching classic puberty and left him with a high voice.

James Victor Scott was born on July 17, 1925 in Cleveland, Ohio. The son of Arthur and Justine Stanard Scott, he was the third child in a family of 10. As a child he got his first singing experience by his mother's side at the family piano and later in church choir. At 13, he was orphaned when his mother was killed by a drunk driver.

Lionel Hampton gave him the nickname "Little Jimmy Scott" because he looked young and was short and of slight build. His phrasing made him a favorite of artists including Billie Holiday, Ray Charles, Frankie Valli, Dinah Washington, and Nancy Wilson.

He first rose to prominence as "Little Jimmy Scott" in the Lionel Hampton Band as lead singer on "Everybody's Somebody's Fool", recorded in December 1949. It became a top ten R&B hit in 1950. Credit on the label went to "Lionel Hampton and vocalists"; Scott received no credit on any of the songs. A similar event occurred several years later when his vocal on "Embraceable You" with Charlie Parker, on the album One Night in Birdland, was credited to the female vocalist Chubby Newsom.

In 1963 his girlfriend, Mary Ann Fisher, who sang with Ray Charles, helped him sign with Tangerine Records, Charles's label, and record the album Falling in Love is Wonderful. The album was withdrawn while Scott was on his honeymoon because he had signed a contract with Herman Lubinsky; it would be 40 years before the album was reissued. Scott disputed the contract he had with Lubinsky, who had loaned him to Syd Nathan at King Records for 45 recordings in 1957–58. Another album, The Source (1969), was not released until 2001.

Scott's career faded by the late 1960s, and he returned to his native Cleveland to work as a hospital orderly, shipping clerk, and elevator operator. He returned to music in 1989 when manager Alan Eichler arranged for him to share a late-night bill with Johnnie Ray at New York's Ballroom. When Scott sang at the funeral of his friend, songwriter Doc Pomus, the event further renewed his career. Afterwards Lou Reed invited him to sing backup on the song "Power and Glory" on Reed's 1992 album Magic and Loss.

Also in attendance at Pomus's funeral was Seymour Stein, founder and operator of Sire Records, who released Scott's 1992 album All the Way, produced by Tommy Lipuma and featuring such artists as Kenny Barron, Ron Carter, and David "Fathead" Newman. Scott was nominated for a Grammy Award for the album.

Scott released Dream in 1994 and the jazz-gospel album Heaven in 1996. His next work, an album of pop and rock interpretations entitled Holding Back the Years (1998), was produced by Gerry McCarthy and Dale Ashley. Released in the US on Artists Only Records in October 1998, it peaked at No. 14 on the Billboard Jazz Albums chart. In Japan, it won the Swing Journal Award for Best Jazz Album of the Year (2000). The title track marked the first time in his career that Scott overdubbed his harmony vocal tracks. Holding Back the Years features cover art by Mark Kostabi, liner notes by Lou Reed, and includes versions of "Nothing Compares 2 U" (written by Prince), "Jealous Guy" (John Lennon), "Almost Blue" (Elvis Costello), and "Sorry Seems to Be the Hardest Word" (Elton John & Bernie Taupin).

In 1999, Scott's early recordings for Decca Records were released on CD, as were all of his recordings with Savoy Records from 1952 to 1975 in a three-disc box set. In 2000, Scott signed to Milestone Records and recorded four albums, each produced by Todd Barkan featuring a variety of jazz artists, including Wynton Marsalis, Renee Rosnes, Bob Kindred, Eric Alexander, Lew Soloff, George Mraz, Lewis Nash, as well as Scott's own touring and recording band, The Jazz Expressions. He released two live albums recorded in Japan. During 2003–04, PBS aired If You Only Knew, a documentary produced and directed by Matthew Buzell that won film festival awards and the Independent Lens award.

On November 21, 2013, Scott's final recording session took place in the living room of his home in Las Vegas. He recorded "Over the Rainbow" as a duet with Scottish singer Storm Gardner for Gardner's CD which was being produced and engineered by jazz artist Tony Guerrero. By this time Scott was confined to a wheelchair and a portable recording was brought in to capture his vocal in his living room. While Scott was enthusiastic about doing the track, Gardner - a devoted Jimmy Scott fan and evangelist - felt the end result did not do Scott's legacy justice and the track remains unreleased.

Scott and his wife Jeanie lived in Las Vegas, Nevada, after purchasing a house in 2006, having previously lived in Euclid, Ohio, for 10 years. Scott died on June 12, 2014, at the age of 88. He died in his sleep at his home in Las Vegas. He was buried in Knollwood Cemetery in Mayfield Heights, Ohio.

Scott performed at the inaugurations of Presidents Eisenhower (1953) and Clinton (1993). On both occasions, Scott sang "Why Was I Born?". Later, he appeared with the lounge music group Pink Martini and continued to perform until his death.

He received the NEA Jazz Masters award (2007) from the National Endowment for the Arts, the Living Legend Award from the Kennedy Center, the Pioneer Award from NABOB (National Association of Black Owned Broadcasters), and the Lifetime Achievement Award from the Jazz Foundation of America (2010).

Scott's recording of "If I Ever Lost You" can be heard in the opening credits of the HBO movie Lackawanna Blues. He was also mentioned on The Cosby Show (season 2, episode 25), when Clair and Cliff Huxtable bet on the year in which "An Evening in Paradise" was recorded. On August 17, 2013, at Cleveland State University, he was inducted into inaugural class of the R&B Music Hall of Fame.

In July 2014, shortly after his death, a portion of East 101st Street in Cleveland was renamed Jimmy Scott Way in his honor.

To learn more about the artist, please visit
https://en.wikipedia.org/wiki/Jimmy_Scott
Back