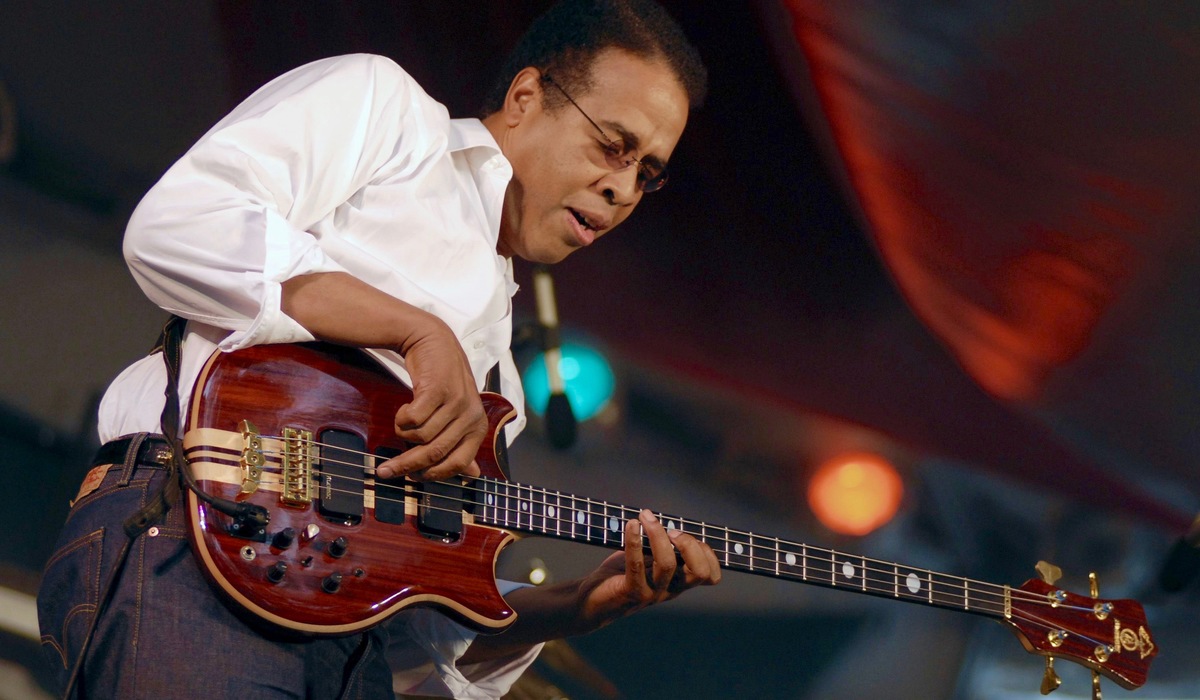 Stanley Clarke (born June 30, 1951) is an American bassist and founding member of Return to Forever, one of the first jazz fusion bands. He has composed music for films and television and has worked with musicians in many genres. Like Jaco Pastorius, Clarke gave the bass guitar a prominence it lacked.

Clarke was born in Philadelphia. His mother sang opera around the house, belonged to a church choir, and encouraged him to study music. He started on accordion, then tried violin. He was introduced to the bass as a schoolboy when he arrived late on the day instruments were distributed to students, and acoustic bass was one of the few remaining selections. He took lessons on double bass at the Settlement Music School in Philadelphia, beginning with five years of classical music. He picked up bass guitar in his teens so that he could perform at parties and imitate the rock and pop bands that girls liked. He cites as influences Ron Carter and Charles Mingus.

Clarke attended the Philadelphia Academy of Music. After graduating, he moved to New York City in 1971. His recording debut was with Curtis Fuller. He worked with Joe Henderson and Pharoah Sanders, then in 1972 with Stan Getz, Dexter Gordon, and Art Blakey, followed by Gil Evans, Mel Lewis, and Horace Silver.

He intended to become the first black musician in the Philadelphia Orchestra until he met jazz pianist Chick Corea. In 1973, he and Corea founded the jazz fusion band Return to Forever with Lenny White and Bill Connors. Fusion was a combination of rock and jazz which they helped develop in the early 1970s. Like Jaco Pastorius, Clarke was playing a new kind of music, using new techniques, and giving the bass guitar a prominence it lacked. He drew attention to the bass guitar as a solo instrument that could be melodic and dominant in addition to being part of the rhythm section. For helping to bring the bass guitar to the front of the band, Clarke cites Pastorius, Paul McCartney, Jack Bruce, and Larry Graham.

After Return to Forever's second album, Light as a Feather, Clarke received job offers from Bill Evans, Miles Davis, and Ray Manzarek of the Doors, but he remained with Return to Forever until 1977.

During the early 1980s, he toured with Corea and Return to Forever, then worked with Bobby Lyle, Eliane Elias, David Benoit and Michel Petrucciani. He toured in a band with Herbie Hancock and Wayne Shorter in 1991. In 1998 he founded Superband with Lenny White, Larry Carlton, and Jeff Lorber.

Corea produced Clarke's first solo album, Children of Forever (1973), and played keyboards on it with guitarist Pat Martino, drummer Lenny White, flautist Art Webb, and vocalists Andy Bey and Dee Dee Bridgewater. Clarke played double bass and bass guitar. While on tour, British guitarist Jeff Beck was performing the song "Power" from Clarke's second self-titled album, and this was the impetus for their meeting. They toured together, and Beck appeared on some of Clarke's albums, including Journey to Love (1975) and Modern Man(1978). The album School Days (Epic, 1976) brought Clarke the most amount of attention and praise he had received so far. With its memorable riff, the title song became so revered that fans called out for it during concerts.

Clark has spent much of his career outside jazz. In 1979, Ronnie Wood of the Rolling Stones formed the New Barbarians with Clarke and Keith Richards. Two years later, Clarke and keyboardist George Duke formed the Clarke/Duke Project, which combined pop, jazz, funk, and R&B. They met in 1971 in Finland when Duke was with Cannonball Adderley. They recorded together for the first time on Clarke's album Journey to Love. The first Clark/Duke Project album contained the single "Sweet Baby", which became a Top 20 pop hit. They reunited for tours during the 1990s and the 2000s.

In 1988, Clarke and drummer Stewart Copeland of the rock band the Police formed Animal Logic with singer-songwriter Deborah Holland. He and Copeland were friends before the Police formed. Copeland appeared on Clark's album Up (Mack Avenue, 2014).

In 2008, Clarke formed SMV with bassists Marcus Miller and Victor Wooten and recorded the album Thunder.

Clarke has written scores for television and movies. His first score, for Pee-wee's Playhouse, was nominated for an Emmy Award. He also composed music for the movies Boyz n the Hood, Passenger 57, and What's Love Got to Do with It, the television programs Lincoln Heights and Soul Food, and the video for "Remember the Time" by Michael Jackson.

In 2007, Clarke released the DVD Night School: An Evening of Stanley Clarke and Friends, a concert that was recorded in 2002 at the Musicians' Institute in Hollywood. Clarke plays both acoustic and electric bass and is joined by guests Stewart Copeland, Lenny White, Béla Fleck, Shelia E., and Patrice Rushen.

In 2010, Clarke founded Roxboro Entertainment Group in Topanga, California. He named it after the high school that he attended in the 1960s. The label's first releases were by guitarist Lloyd Gregory and composer Kennard Ramsey. Roxboro's roster also includes keyboardist Sunnie Paxson, pianist Ruslan Sirota, and pianist Beka Gochiashvili.

When playing electric bass, Clarke places his right hand so that his fingers approach the strings much as they would on an upright bass, but rotated through 90 degrees. To achieve this, his forearm lies above and nearly parallel to the strings, while his wrist is hooked downward at nearly a right angle. For lead and solo playing, his fingers partially hook underneath the strings so that when released, the strings snap against the frets, producing a biting percussive attack. In addition to an economical variation on the funky Larry Graham-style slap-n'-pop technique, Clarke also uses downward thrusts of the entire right hand, striking two or more strings from above with his fingernails (examples of this technique include "School Days", "Rock and Roll Jelly", "Wild Dog", and "Danger Street").

A Church of Scientology web site reported that Clarke was a member and performed at one of its Hollywood parties in 2012. In 2013, the Morton Report web site wrote that Clarke was no longer a member.

To learn more about the artist, please visit
https://en.wikipedia.org/wiki/Stanley_Clarke
Back