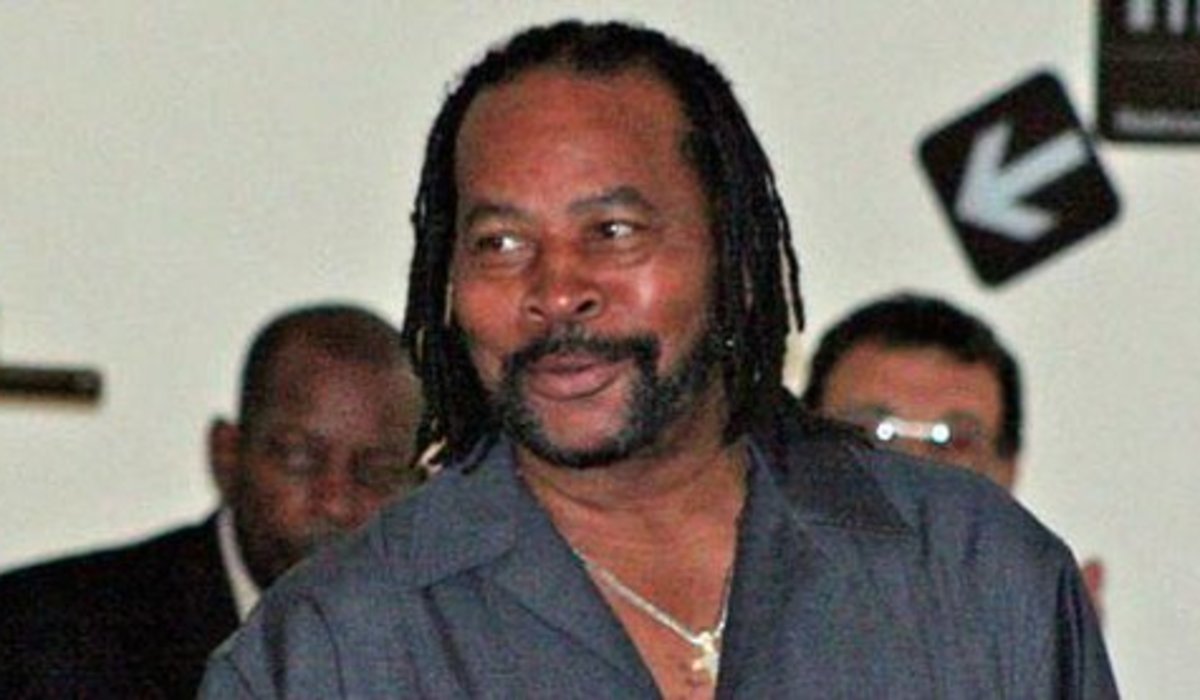 Ray, Goodman & Brown is an American R&B vocal group. The group originated as The Moments, who formed in the mid-1960s and whose greatest successes came in the 1970s with hits including "Love on a Two-Way Street", "Sexy Mama" and "Look at Me (I'm in Love)". In 1979, for contractual reasons they changed their name to Ray, Goodman & Brown and had further hits, including "Special Lady". A lineup of the Moments (featuring original member Mark Greene) also tours currently.

The original members of the Moments were Mark Greene, Eric Olfus Sr., Richard Gross (often incorrectly listed as "Richard Horsley") and John Morgan. The Moments formed in Washington, D.C. during the mid-1960s. In 1965, at Washington D.C.'s Howard University, the Mizell Brothers and Freddie Perren (along with schoolmate Toby Jackson) founded Hog Records and signed the harmony group as the Moments. The Moments recorded "Baby I Want You" and "Pray For Me" for Hog. The lineup consisted of Olfus, Gross and Morgan.

Mark Greene joined after the single's release. The group then signed with the newly established Stang Records label, set up by Sylvia Robinson at All Platinum Studios in Englewood, New Jersey with her husband Joe. The group had its first hit almost immediately late in 1968 with "Not On The Outside", which reached #13 on the R&B chart and #57 on the Billboard Hot 100 (with Greene on lead vocal). Robinson then hired a management firm headed by radio stars Frankie Crocker, Herb Hamlett and Eddie O'Jay. The trio began promoting the Moments and booking them for live events in major cities. When Hamlett moved to WCMF in Rochester, New York, he booked the Moments exclusively.

Their first Stang album release pictured William "Billy" Brown, Al Goodman and Morgan on the cover, although various members' voices appeared on different tracks recorded between 1968 and 1969. There also appear to be female voices; although never confirmed, it is believed that Sylvia Robinson (herself a professional singer) supplied some of those parts, along with Stang artist Lezli Valentine and studio vocalist Rhetta Young. When members left (or were replaced) it was less costly to re-cut only the lead vocal (which, in the case of the Moments' earliest studio productions, makes it difficult to determine who is backing the lead voice). Before three of the original members of the Moments left All Platinum, they recorded their breakthrough song "Love On A Two Way Street" (which reached #1 on the R&B chart and #3 on the pop chart in the spring of 1970). It sold over one million copies, and was awarded a gold disc by the RIAA. All Platinum also released a single recorded by Mark Greene entitled "My Confession of Love", with the flip side "I'm So Lost", on the Stang label. The B-side track appeared on the first Moments album (with Billy Brown's replacement lead vocal) in 1969, and was released as a single later that year with moderate chart success. The group also released "My Confession of Love" under the name "Black Satin", with Crocker speaking the lyrics.

The group quickly scaled down to a trio after one live appearance at the Apollo Theater as a quartet (some sources credit Greene, Gross—aka Richie Horsley and Morgan or sometimes Greene, Horsley and Johnny Moore as the trio lineup). Greene, Olfus and Gross left All Platinum together in 1969, replaced by baritone Goodman and new lead tenor/baritone singer William "Billy" Brown while Morgan stayed on. Gross was incorrectly credited as Richie Horsley on legal documents, liner notes, websites, articles and in books about the Moments. Brown had previously been a member of The Broadways, who had recorded on the MGM label. Goodman (after a couple of performances with The Corvettes and The Vipers) was hired by Joe Robinson as a studio-production creative assistant, singer and songwriter. On records, he played the substitute role of Mickey (in Mickey & Sylvia, of whom Sylvia Robinson was formerly one-half).

After three of the four original members of the Moments had left All Platinum, Billy Brown rerecorded a new lead-vocal track of "Love On A Two Way Street". The song had originally been recorded by Stang artist Lezli Valentine, but failed to chart; the Moments' version (produced by Sylvia Robinson) was originally included as a filler cut on their first LP (released in 1969) entitled Not On The Outside...But On The Inside, Strong! Early in 1970 it was remixed, issued as a single and reached the #1 R&B spot for five weeks. The first album also contained a Moments version of another Lezli Valentine song entitled "I Won't Do Anything", with Brown on lead vocals; it became the flip side of the hit single.

In 1971 Bert Keyes encouraged Greene, Gross and Olfus to sign with Volt Records, a subsidiary of Stax. Keyes had worked with the group at All Platinum Records as a producer, arranger and session keyboardist in the studio's house band (later leaving the label because of disputes with the Robinsons). The group signed with the Volt/Stax label as The Leaders, recording in New York City. The Leaders had four members: Greene, Gross, Olfus and Donald Spriggs. They were managed by songwriter Myrna March, and Keyes produced several of the songs they recorded for Volt.

Between the first album's release and the Moments' #1 hit, Morgan was briefly replaced by Sylvia Robinson's brother-in-law Johnny Moore (not to be confused with the Drifters' singer). He appeared with Goodman and Brown on the cover of the group's 1970 second album; however, Moore was absent from a live appearance. Since the Moments were now considered a headline attraction, he was fired; Goodman and Brown worked as a duo until new arrival Harry Ray rounded out the trio. This lineup became Sylvia Robinson's favorite, and the one most heavily promoted by All Platinum. Ray sang lead while Brown recovered from vocal overuse, and was the lead voice on many of the Moments' subsequent hits including the follow-up "If I Didn’t Care" (#7 R&B, #44 pop, 1970), "Sexy Mama" (#3 R&B, #17 pop, 1973) and "Look At Me (I'm In Love)" (#1 R&B, #39 pop, 1975).

After Brown recovered, they shared lead vocal duties; occasionally Goodman took a turn, and served as spokesman for the group. Their album, entitled A Moment with the Moments, showed Goodman, Brown and Johnny Moore on the cover and was hastily released while Brown was still recovering. The release numbers ran out of sequence in their hurry to support the single "If I Didn't Care" in 1970. This was the first Moments lead vocal for Ray, and the only track on which Ray appeared. Another remix of "Love On A Two Way Street" was included, but the rest of the album consisted of tracks recorded before Brown's illness (mainly B-sides from earlier singles). Moore was gone from the group by the time the album reached the charts. After Brown's voice returned, Stang began releasing singles from the On Top album, with Ray and Brown dividing lead vocals. Ray also recorded a duet with Sylvia Robinson, "Sho Nuff Boogie" (credited as Sylvia and the Moments), in 1973.

The Moments were co-credited with labelmates The Whatnauts on their hit "Girls (Part 1)"; it reached #25 on the U.S. R&B charts and became one of their biggest international successes, reaching #3 on the UK Singles Chart in 1975. Ray and Goodman were strongly involved in writing and producing much of the Moments' material from the mid-1970s, as well as producing and writing for The Whatnauts and All-Platinum's other artists.

By 1979, the group had had a total of 27 R&B chart hits and decided to leave Stang, signing with the larger Polydor Records label. A legal dispute arose, barring them from using "The Moments" on their new label, so they renamed the group with their last names: Ray, Goodman & Brown.

The first single under their new name, "Special Lady," became one of their biggest hits, reaching #1 on the R&B chart and #5 on the pop chart in early 1980. The B-side featured “Déjà Vu”, with lyrics by Bob Natiello and music by Lou Toby. They followed up with more hits, including "Inside Of You" (#14 R&B, 1980). In 1982, following the release of their fourth (and final) Polydor album, Ray left to pursue a solo career and was replaced by Kevin "Ray" Owens, a backing vocalist for Luther Vandross. Ray re-joined Sylvia and Joe Robinson at their new venture (Sugar Hill Records), but after one album and a minor hit, "Sweet Baby," he rejoined Goodman and Brown in 1983 for their comeback on EMI with the ballad "Take It To the Limit" (which put them back on the R&B charts at #8 in 1987). In 1991, Harold "Eban" Brown, former vocalist for The Delfonics, became the lead vocalist for Ray, Goodman & Brown. He stayed for two and a half years before joining The Manhattans and became lead vocalist for The Stylistics in 2000.

Ray suffered a fatal stroke in 1992 and was again replaced in the group by Kevin "Ray" Owens. Occasionally solo artist Greg Willis joined Ray, Goodman and Brown in performances (and later on records), but never became a full-time member. Vocalist Wade "Silky" Elliott also did a stint, before signing a solo contract with CBS Records during the 1990s and temporarily joining Blue Magic. With Owens' return, the trio continued to perform and tour as Ray, Goodman & Brown. They released two albums in 2002 and 2003: one with new material, and the other featuring re-workings of soul songs by other male vocal groups. These albums reunited them with former All-Platinum producer George Kerr. In one of their public appearances, they teamed with Gerald Alston to perform The Manhattans' hit "Kiss and Say Goodbye". They sang backup vocals for Alicia Keys song "You Don't Know My Name," which was a #1 soul/R&B song in 2003. As of 2008 Owens, Goodman and Brown continued to record together and tour (sometimes with vocalist Larry "Ice" Winfree), performing hits from both the Moments and Ray, Goodman and Brown. On July 26, 2010 Goodman died at the age of 67. In 2012, Harold "Eban" Brown rejoined remaining original member Billy Brown to re-record The Moments Greatest Hits - Volume 1. It was released in April 2014 on the Universal Music Group label - featuring the vocals of Harold "Eban" Brown and Billy Brown only. As of 2014, Winfree was officially welcomed into the group as the replacement for Goodman, with Owens and Brown, bringing the group back to its regular trio status.

Mark Greene was called back to join the renamed Ray, Goodman & Brown; however, he declined, claiming that no royalties were ever paid him. His website displays information about the original group: the founding members, and a photograph of the quartet before Robinson reorganized the act. He released a self-produced CD project entitled Love Is More Than Spoken on the FAJR label. There was also a CD release on FAJR entitled Unspoken Moments by the Moments featuring Mark Greene picturing Greene, Johnny Moore and Gross (aka Horsley) on the cover; Greene later acquired the trademark for the Moments name. Now known as "The Moments featuring Mark Greene", he released 'Urban Legacy' in 2000 which featured tracks recorded in 1967 and featuring: Solomon Cunningham, Huitt Cunningham and Loren Brown. This group without Huitt Cunningham were performing and touring with Greene at the beginning of the 21st century.

It was reported that William "Billy" Brown suffered a stroke in 2016.

To learn more about the artist, please visit
http://wikipedia.thetimetube.com/?lang=en&q=Ray, Goodman & Brown
Back